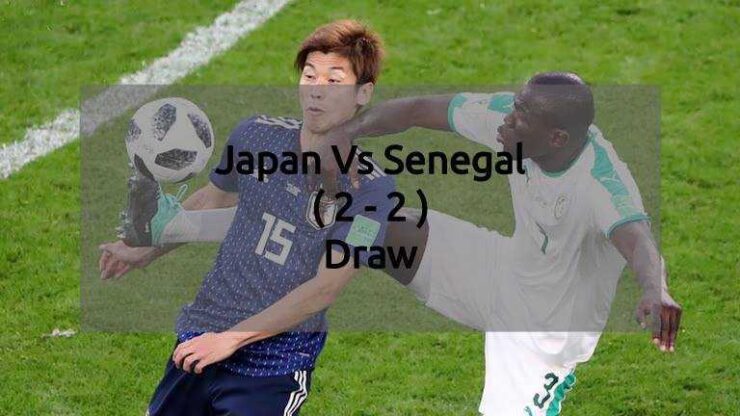 In a thrilling contest between Japan vs. Senegal on Sunday, no team came out as the winner, as both the sides stopped each other on a draw scoring two goals each.

With one win under their belt, both Japan and Senegal entered the match with the hopes of consolidating their position in the round of 16 but had to settle with a tie.

The Senegal team drew the first blood in the match with a goal in the 11th minute after a series of errors from the Japanese side, Sadio Mane being the scorer. Both the teams played carefully after the first goal until the 34th minute when Nuto Nagatomo helped Takashi Inui to take a shot in the goal and bring the score to 1-1. The scores stayed the same until the end of the first half.

The next half started with both the teams intending to score another goal. The match stayed evenly poised till the 71st minute when Wague successfully sent the ball in the goal giving a 2-1 lead to Senegal. In 7 minutes of time, Japan was able to score the equalizing goal, this time hit by substitute Keisuke Honda.

The rest of the match included valiant efforts by both the sides to take the lead, but none could achieve it. The final score-line read 2-2, with both the teams sharing the points.

An exciting sight could be seen after the Japan vs. Senegal match when both the team fans could be seen cleaning their sides of the stadium. It was a nice gesture by the fans of both countries, giving us all the more reasons to love the FIFA World Cup 2018.

Japan will now be playing the next match on 28 June against Poland, the same day on which Senegal vs. Colombia will take place. Both the sides will be looking to secure their positions in the next round as they fight hard to reach the top of the table in Group H of the FIFA World Cup 2018.