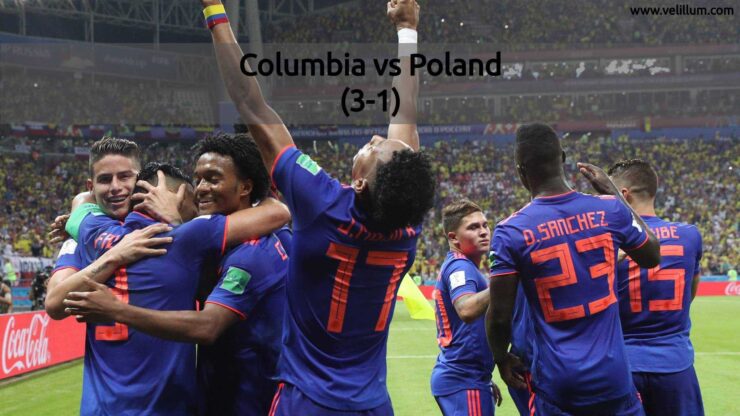 Coming into the match after losing 1-2 to Japan, experts were expecting a weak performance by Colombia. But it was completely reversed, as Colombia vs Poland match ended with a 3-0 win for the South Americans.

The match, on Sunday, started with Colombia on the offense. Colombians showed great control throughout the game as they outplayed the Polish defense. Yerry Mina scored the first goal in the 40th minute. The game went on without the goal after the first till the last 5 minutes of the match, when Falaco and Cuadrado chipped in with a goal each. Rodriguez playing in the mid-field shined on his return, by assisting two goals.

With this win, the Colombians have managed to keep their chances alive in the tournament. Poland, on the other hand, has been knocked out of the FIFA World Cup 2018 with this loss. The performance of the Polish team has been dismal in this year, as the team has failed to make any mark. The team looked out of sorts in Senegal vs Poland match, where they lost 1-2 to Senegal.

The Colombian win has spiced up the Group H where Japan and Senegal are also in contention of making it to the last 16 with 4 points each. All the three teams will be fighting for their position on 28 June. The two clashes on Thursday will include Senegal vs Colombia and Japan vs. Poland.

Going by the current form, Japan looks all set to winning and make it to the next round. Polish team, however, will look to play for pride in their last game. It will be interesting to see the result of Senegal vs Colombia as it might decide who makes it to the next round. Do stay connected to Vel illum as we will analyze both the matches in detail. Check out our other posts for more news on FIFA World Cup 2018.