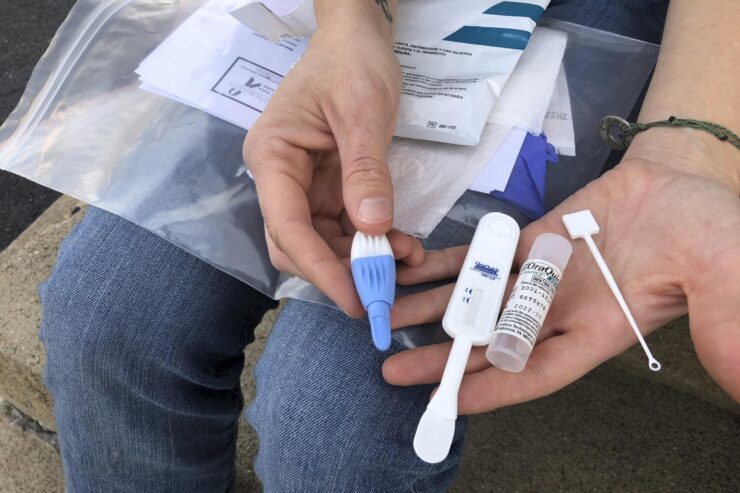 Home » Strides Against HIV/AIDS In The U.S. Falter As Resources Diverted To Fight COVID-19
Health

Facing a yearlong siege from the coronavirus, the defenses in another, older war are faltering.

For the last two decades, HIV/AIDS has been held at bay by potent antiviral drugs, aggressive testing and inventive public education campaigns. But the COVID-19 pandemic has caused profound disruptions in almost every aspect of that battle, grounding outreach teams, sharply curtailing testing and diverting critical staff away from laboratories and medical centers.

The exact impact of one pandemic on the other is still coming into focus, but preliminary evidence is disturbing experts who have celebrated the enormous strides in HIV treatment. While the shift in priorities is nationwide, delays in testing and treatment carry particularly grievous risks in Southern states, now the epicenter of the nation’s HIV crisis.

“This is a major derailing,” says Dr. Carlos del Rio, a professor of medicine at Emory University in Atlanta and head of the Emory AIDS International Training and Research Program. “There will be damage. The question is, how much?”

Clinics have limited in-person visits, and doctors’ offices and emergency rooms have halted routine HIV screening, with physicians relying instead on video calls with patients, a futile alternative for those who are homeless or fear that family members will discover their status. Rapid-testing vans that once parked outside nightclubs and bars and handed out condoms are mothballed. And, in state capitals and county seats, government expertise has been singly focused on the all-hands-on-deck COVID-19 response.

Concrete signs of the impact on HIV surveillance abound: One large commercial lab reported nearly 700,000 fewer HIV screening tests across the U.S. — a 45% drop — and 5,000 fewer diagnoses between March and September 2023, compared with the same period the year before. Prescriptions for PrEP, a preexposure prophylaxis that can prevent HIV infection, also have fallen sharply, according to new research presented at a conference last month. State public health departments have recorded similarly steep declines in testing.

That dearth in new data has led to a precarious, unknowable moment: For the first time in decades, the nation’s lauded HIV surveillance system is blind to the virus’s movement.

Nowhere will the lack of data be felt more profoundly than in the South: The region accounts for 51% of new infections, 8 of the 10 states with the highest rates of new diagnoses and half of all HIV-related deaths, according to the most recent data available from the Centers for Disease Control and Prevention.

CDC Says HIV Spike In West Virginia Is Most Concerning Outbreak In U.S.
Even before the COVID-19 pandemic, Georgia had the highest rate of new HIV diagnoses of any state, though lower than that of Washington, D.C. The Georgia Department of Public Health recorded a 70% drop in testing last spring compared with the spring of 2019.

The slowdown in HIV patient services “could be felt for years,” says Dr. Melanie Thompson, principal investigator of the AIDS Research Consortium of Atlanta.

She adds, “Every new HIV infection perpetuates the epidemic and will likely be passed to one or more people in the months to come if people are not diagnosed and offered HIV treatment.”

Coronavirus testing has commandeered the machines previously used for HIV testing, further straining surveillance efforts. The polymerase chain reaction, or PCR, machines used to detect and measure the genetic material in the human immunodeficiency virus are the same machines that run coronavirus tests around the clock.

Over the decades, as HIV migrated inland from coastal cities like San Francisco, Los Angeles and New York, it took root in the South, where poverty is endemic, lack of health coverage is commonplace and HIV stigma is pervasive.

“There is the stigma that’s real. There is legacy racism,” says Dr. Thomas Giordano, medical director of Thomas Street Health Center in Houston, one of the largest HIV clinics in the United States. The state’s political leaders, he says, view HIV as “a disease of the poor, of Blacks, Latinos and gay. It’s just not mainstream at the state level.”

HIV clinics that serve low-income patients also face limitations in using video and phone appointments. Clinic directors say that poor patients often lack data plans and that many homeless patients simply don’t have phones. They also must contend with fear. “If a friend gave you a room to sleep and your friend finds out you have HIV, you might lose that place to sleep,” says del Rio of Emory University.

Texting can be tricky too. “We have to be cautious about text messages,” says Dr. John Carlo, CEO of Prism Health North Texas in Dallas. “If someone sees their phone, it can be devastating.”

In Mississippi, HIV contact tracing — which was used as a model for some local efforts to track the coronavirus — has been limited by coronavirus-related travel restrictions meant “to protect both staff and client,” says Melverta Bender, director of the STD/HIV office at the Mississippi State Department of Health.

Of all regions in the U.S., the South has the weakest health safety nets. And Southern states have far fewer resources than states like California and New York. “Our public health infrastructures have been chronically underfunded and undermined over the decades,” says Thompson, the Atlanta researcher. “So we stand to do worse by many metrics.”

The porous safety net extends to health insurance, a vital need for those living with HIV. Nearly half of Americans without health coverage live in the South, where many states have not expanded Medicaid under the Affordable Care Act. That leaves many people with HIV to rely on the federal Ryan White HIV/AIDS Program and state-run AIDS drug assistance programs, known as ADAPs, which offer limited coverage.

“As a matter of equity, insurance is critical for people to live and thrive with HIV,” says Tim Horn, director of health care access at NASTAD, the National Alliance of State and Territorial AIDS Directors. Ryan White and ADAPs “are not equipped to provide that full sweep of comprehensive care,” he says.

Roshan McDaniel, South Carolina’s ADAP program manager, says 60% of South Carolinians enrolled in ADAP would qualify if her state expanded Medicaid. “The first few years, we thought about it,” says McDaniel. “We don’t even think about it nowadays.”

Enrollment in the Ryan White program jumped during the early months of the pandemic, when state economies froze and Americans hunkered down amid a grinding pandemic. Data from state health departments reflect the increased need. In Texas, enrollment in the state’s AIDS drug program increased 34% from March to December 2023. In Georgia, enrollment jumped 10%.

State health officials attribute the increased enrollment to pandemic-related job losses, especially in states that didn’t expand Medicaid. Antiretroviral treatment, the established regimen that suppresses the amount of virus in the body and prevents AIDS, costs up to $36,000 a year, and medication interruptions can lead to viral mutations and drug resistance.

But qualifying for state assistance is difficult: Approval can take up to two months, and missing paperwork can lead to canceled coverage.

Federal health experts say Southern states have generally lagged behind in getting patients into medical care and suppressing their viral loads, and people with HIV infections tend to go undiagnosed longer there than in other regions. In Georgia, for example, nearly 1 out of 4 people who learned they were infected developed AIDS within a year, indicating their infections had long gone undiagnosed.

As COVID-19 vaccinations become widely available and restrictions ease, HIV clinic directors are scouring their patient lists to determine whom they need to see first. “We are looking at how many people haven’t seen us in over a year. We think it’s over several hundred. Did they move? Did they move providers?” says Carlo, the doctor and health care CEO in Dallas. “We don’t know what the long- term consequences are going to be.”