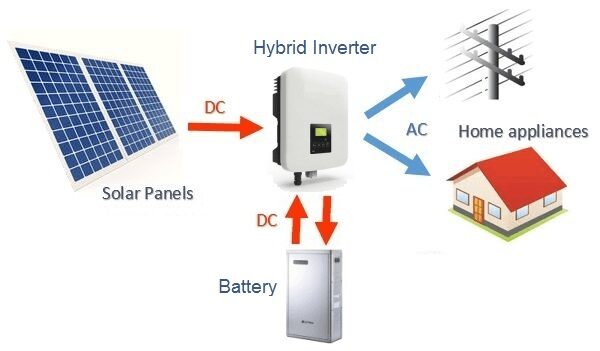 Solar panels are used to convert sunlight (from energy particles called “photons”) into electricity, which can be used to power electrical equipment such as electric air pump, fans and industrial machineries.

How does Solar Panel work?

The solar panel captures photos and starts the current trend. The energy generated by photons hitting the surface of the solar panel is created by the escape of electrons from their atomic orbit and is transferred to the electric field generated by the solar cell, which drags these free electrons in the direction of the current. The whole process is called the photovoltaic effect. The roof area of ​​a typical household is large enough to accommodate the number of solar panels needed to produce enough solar energy to meet all of your electrical needs. The excess electricity generated enters the grid and is charged overnight.

By using an inverter, the size of the solar panel array can meet most of the electrical load needs.AC power can be used to charge electricity in commercial homes or buildings, RVs and boats, cabins, cabins or remote homes, remote traffic control, telecommunication equipment, oil and gas flow monitoring, RTU, SCADA and so on Street.

Following are some factors that affect the solar panel efficiency.

1) Angle of inclination of solar panel

Solar panels need to absorb sunlight at the best angle to really improve photoelectric conversion efficiency. At different times, geographic locations and sunlight conditions, the optimal angle of inclination of solar panels will also differ. Therefore, the angle of inclination of the solar panels should be actively adjusted according to the changes of the seasons, the latitude and longitude and the hours of sunlight.

Fixed angle of inclination should be selected as the tilt angle based on the maximum annual production capacity.

Cleaning the surface of the solar panel also affects the variation of the photovoltaic energy.

As the light and the temperature of the sun change, the output voltage of the solar panel changes as well as the output power of the photovoltaic array.

The purpose of tracking the maximum power point of a solar inverter (MPPT) is to allow the photovoltaic array to obtain maximum output power in the event of changes in sunlight and temperature, so the accuracy of the MPPT affects the performance of the system. Today, solar charge controllers are also used to monitor the maximum power delivered by solar energy in real-time.