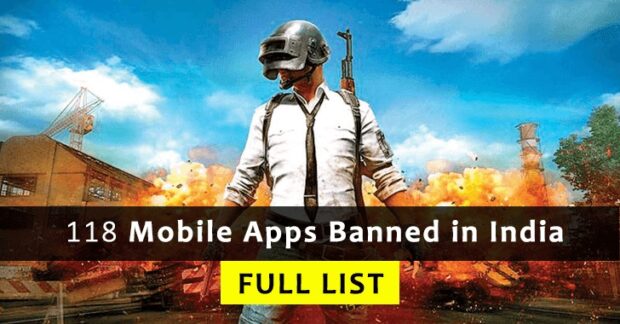 The Ministry of Information and Technology on Wednesday banned more 118 Chinese apps including the worldwide popular game PUBG. This strict decision is taken by the Indian government to protect the integrity and sovereignty of the country, security of public and state order, and defense of India. The decision is taken under Section 69 of the Information Technology Act.

According to a statement made by one of the government officials, the blocked apps include Baidu, Tencent Watchlist, WeChat Reading, FaceU, Alipay, Ludo All-Star, and PUBG Mobile Lite and PUBG Mobile.

The Ministry has said in a press release that they have received several complaints from different sources about the wrong use of certain apps on iOS and Android platforms. According to reports, the blocked apps are found to steal and illegally transmit user data to servers located outside the country.

The stealing and transmission of these user data pose a threat to the defense and national security of India. This makes it a matter of immediate concern that needs emergency measures. The Indian Cyber Crime Coordination Centre has also requested to ban these apps. The same concern has been flagged by many of the members inside and outside the parliament as well.

There has been a strong appeal to take emergency steps against these apps that threatens the sovereignty and privacy of the country and its citizens. Based on numerous complaints received by the ministry, the government decided against banning these apps.

The use of these apps raises serious concerns as they have been to collect and share data in an authorised manner. The compromise of personal and user data can have a serious impact on the security of the country. Keeping each of these points in mind, the Indian government decided to ban the usage of these apps in both non-mobile and mobile devices.

Also, see: Top 9 Must Have Apps for Android

The ministry said that with this decision, the government plans to protect the interests of millions of Indian users. This particular decision is aimed to ensure security, safety, and sovereignty of the country’s cyberspace. This decision was passed by the government at a time when the Chinese army allegedly made an unlawful attempt near the southern bank of Pangong Tso.

Here is the complete list of 118 apps that have been banned by the Indian government:

Previously, in June, the Indian government had banned 59 Chinese apps including the popular short video sharing app, Tik Tok. The list also included other popular apps like Baidu Map, UC Browser, Baidu Translate, and Weibo. These apps were too banned for the same reason as the 118 apps. All these apps are a threat to the integrity, sovereignty, and security of India.

Here is the list of 59 apps that were banned by the Indian government previously:

Till now the government has banned a total of 177 Chinese apps in the country. App developers in India are working fast to come up with the best alternatives for all these apps. Stay tuned to our website to find alternatives of each app.