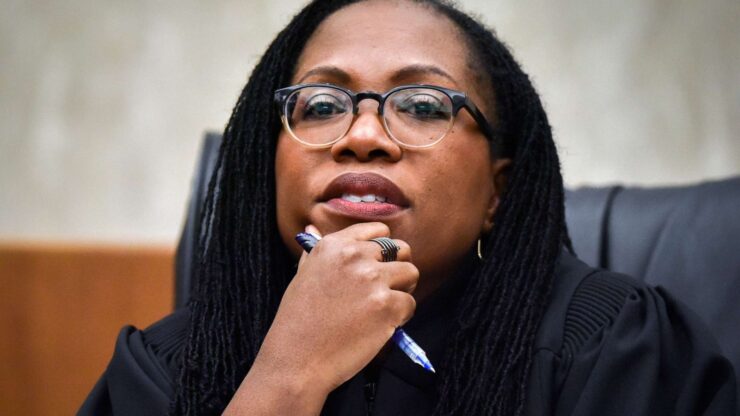 In a statement, the White House said Biden would nominate 10 “individuals to serve as Federal Circuit and District Court judges, and one individual to serve as a Superior Court Judge for the District of Columbia.”

“These nominees consist of attorneys who have excelled in the legal field in a wide range of positions, including as renowned jurists, public defenders, prosecutors, in the private sector, in the military, and as public servants at all levels of government,” the statement said.

In all, nine of the nominees are women, and nine are people of color. Most have diverse legal experience as well, as defense and prosecution lawyers, and in both criminal and civil practice.

Biden, as a candidate, pledged to select a Black woman for the high court should a vacancy occur. Jackson, along with California Supreme Court Justice Leondra Kruger, has long been considered a leading contender for such a spot.

Supreme Court Justice Stephen Breyer, who is 82, would be the most likely justice to step down. Despite mounting pressure in the political and academic worlds, however, he has given no indication yet that he plans to retire.

Also nominated on Tuesday were:

Trump was able to accomplish that, in part, because Republicans also controlled the Senate, and McConnell got rid of most of the remaining rules that had allowed the minority party to slow down or block nominees they objected to.

In contrast, former Democratic Presidents Obama and Bill Clinton, whose party also controlled the Senate at the beginning of their terms, were slow to fill judicial seats, focusing instead on legislative priorities. By the time they did turn in earnest to filling empty judicial seats, they faced frequent Republican opposition including filibusters and, eventually, Republican control of the Senate. That allowed McConnell in the last two years of Obama’s presidency to hold many important appellate seats open by blocking the president’s nominees. He also blocked the nomination of Garland, now attorney general, to the Supreme Court.

Biden’s staff says he has learned that lesson and that the president sees filling judicial seats as a top priority. Indeed, his chief of staff, Ron Klain, was counsel to the Senate Judiciary Committee and, according to friends, “has that lesson imprinted on his brain.”

District Court judges are, by tradition, usually proposed by senators from their home states, and the Biden letter urged senators in particular to focus on “nominating individuals whose legal experiences have been historically underrepresented on the federal bench, including those who are public defenders, civil rights and legal aid attorneys, and those who represent Americans in every walk of life.”

Importantly, the letter asked that all recommended names be submitted “within 45 days of any new vacancy being announced.”

No senator openly opposes the idea of gender and racial diversity on the bench. But Trump named fewer women and minorities than any other president in 28 years.

Some in the progressive wing of the Democratic Party want more than gender and racial diversity. They want more diversity in legal experience. They want fewer prosecutors, more public defenders, for instance. And some groups, like Demand Justice, are pushing essentially for a ban on on judicial candidates who have represented corporations.

There are already 84 District Court vacancies with 62 of the seats now empty, plus 22 more judges having announced that they will leave their posts or take “senior status” within weeks or months.

In addition, there are 12 appeals court vacancies to fill. Under the current Senate rules, these are harder to get through because the minority party, now Republican, is permitted to debate appellate court nominees for up to 30 hours, while District Court nominees have a two-hour debate limit under the rules.

In short, even though the filibuster for judicial nominees was abolished in 2013, it is still very time-consuming to confirm any appeals court nominee if there is concerted opposition from the opposition party.

Democratic Sen. Chris Coons of Delaware is worried about that. He notes that the Senate operates on a limited floor schedule with most votes typically taking place Wednesday and Thursday. Senators often arrive for a first vote Monday evening and leave Washington on Friday. To cite just one example, it took eight months for Obama’s first nominee to an appeals court to be confirmed.

Coons, a member of the Judiciary Committee who is a close Biden ally, says he wants to “do a couple of weekends and grind them out and demonstrate enthusiasm for filling vacancies. That’ll send a signal to those considering senior status that we will take those vacancies seriously,” he says.

It would also send a signal to Republicans that judicial fights will cost them time at home. That said, Democrats don’t like sticking around in Washington either, as Reid observes.

Keeping the Senate in session to confirm judges is “great in theory,” the Nevada Democrat said in an NPR interview. “I’ve been there and tried to do that. But members want to get home.” They have scheduled fundraisers, speeches, “parades and that kind of stuff. It’s hard to keep them around.”

So, whether Coons and others can persuade fellow Democratic senators to do some marathon weekend sessions is an open question.

When Trump was president and the Republicans were in control, says Reid, they “turned the Senate into a manufacturing site for judges. We are way behind. We need to catch up. Because we have a lot of vacancies, we need to fill them.”
https://velillum.com/news/graham-echoed-that-he-hoped-other-states-would-follow-south-carolinas-example-with-similar-initiatives-and-pushed-for-federal-tax-credits/
https://oftenit.com/south-carolina-and-other-states-were-forced-to-compete-against-one-another-for-limited-domestic-supplies-of-personal-protective/
https://oftenit.com/the-three-locations-are-the-only-plants-designated-to-build-the-next-generation-of-sprinter-vans/
https://oftenit.com/commerce-department-to-prioritize-economic-development-projects-and-recruitment-efforts-targeting-pharmaceutical-and-medical/
https://oftenit.com/because-essential-goods-and-products-were-and-still-are-disproportionately-manufactured-outside-of-our-country-in-countries-like-china/