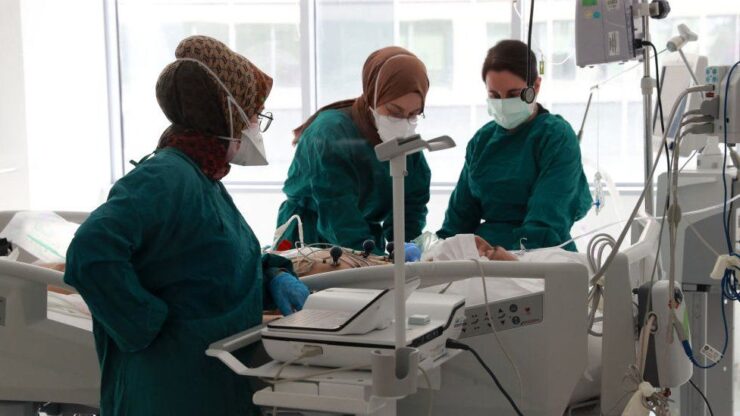 The streets were crowded, the shopping centres busy and the traffic heavy.

Some flocked to the main bus terminal to get out of Istanbul, while others tried to stockpile alcohol amid news of a “booze ban”.

This was the mood in the hours before Turkey went into its first full pandemic lockdown, to curb a surge in infections and deaths.

WhatsApp groups have been dominated by messages about how life will be in the coming days.

This time last year, Turkey was seen as a success story for its early combative action and was even praised by the WHO.

Ankara is still proud of its relatively low total number of deaths, at around 39,000, and authorities say the pandemic is still under control, thanks to the country’s strong healthcare system. But the spike in the number of cases is worrying.
Three masked medical workers tend to a patient in an intensive care unit in Ankaraimage copyrightAFP
image captionInfection rates have surged this month and more than 300 deaths have been reported every day

Following a second period of restrictions starting last November, the number of daily cases fell to around 6,000 at one point in mid-February.

But as soon as the government started to ease the restrictions in March, a new wave struck Turkey.

The government then U-turned to re-impose restrictions at the beginning of April. However, that was not enough to curb the spread of infections.

At its height in April, there were more than 60,000 new cases a day and more than 300 deaths.
Graph showing cases by European countries
Presentational white space
Why did it happen?

According to critics, the government lifted restrictions too early and the vaccination process has not been fast enough.

More than 22 million people have been vaccinated so far in this country of 82 million.

Turkey mainly uses the Chinese Sinovac vaccine, as well as lower numbers of Pfizer-Biontech.
Medical workers arrive at the village of Guneyyamac in eastern Turkey, as part of a vaccination expeditionimage copyrightAFP
image captionMedical workers travelled to the remote village of Guneyyamac in eastern Turkey to carry out vaccinations for the elderly

Health Minister Fahrettin Koca said recently: “We have sped up vaccine diplomacy for the injections including Sinovac, Pfizer-Biontech and (Russia’s) Sputnik V”.

Whatever the reason for the new wave, Mr Erdogan finally announced a full lockdown effective from Thursday evening until 17 May.
What are the new measures?

People will have to stay at home except for essential shopping trips and urgent medical treatment
All travel between cities will require official approval
Schools will close and strict capacity limits will be imposed on users of public transport
Alcohol sales are being limited
Some businesses are exempt from the new restrictions.

Many experts are happy with the new lockdown as they say it is necessary.

However, some argue that the lockdown will not last long enough to combat the rise in cases and that it may not be very effective if it is not supported by a faster vaccination programme. Any measures should also provide economic support for low-income people, they believe.

Across Turkish society there is a determination to see the back of this most recent wave, and the government has a clear target.

President Erdogan has said: “At a time when Europe is entering a phase of reopening, we must rapidly reduce our number of cases to fewer than 5,000, not to be left behind”.

The measures last throughout the rest of Ramadan and the Eid festival that follows it.

Last year Turkey saw a 70% fall in foreign visitors. The tourist industry hopes the lockdown will help enable a reopening in time for the summer season.