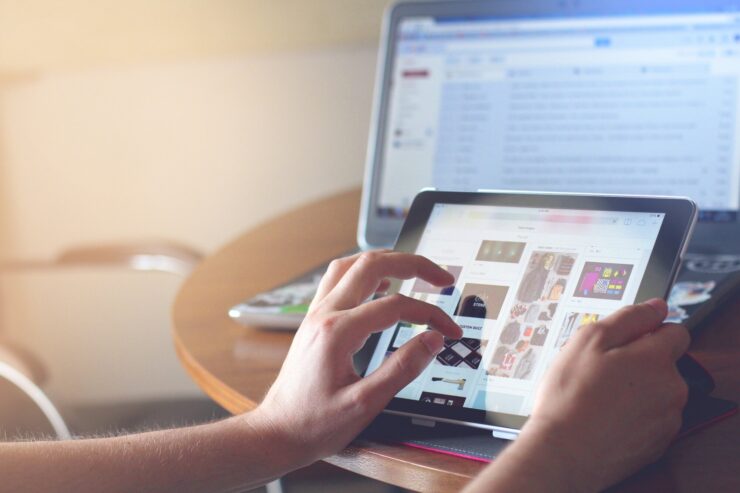 Home » Tablet vs Laptop: What Is the Best Choice?
Blog

Tablet vs Laptop: What Is the Best Choice?

Thinking of buying a new portable computer? If so, you’re likely struggling to choose between a tablet and a laptop.

These days, the tablet vs laptop debate is more complex than ever. After all, today’s ultra-functional tablets are almost as good as full-fledged laptops. The only way to pick one is to look at the advantages of both and how they fit your personal needs.

Not sure where to start? Here are ten key factors that will help you reach the right decision when it comes to buying a tablet or laptop!

Display-wise, laptops have a built-in advantage due to the larger screen size. That said, tablets can make up for it by offering higher pixel density. This causes the displayed image to be sharper and makes a better job of hiding individual pixels.

With most tablets ranging from 7 to 13 inches, there’s no question that they win the portability battle. They strike the perfect balance between ergonomics and screen size. Laptops cover a wide size range, but most of them come with 15-17 inch screens.

On top of that, tablets are lighter than even the most compact laptop on the market right now. The average laptop weighs a solid 5 pounds, which is a lot to lug around. If you’re planning on taking your device with you a lot, a tablet is an obvious choice.

Today’s tablets tend to run on either iOs or Android, with Fire OS rising in popularity as well. Laptops use macOS, Windows, and Linux. As a rule of thumb, mobile systems are easier to use, whereas laptop systems offer more options.

The limitations of mobile OSs are the main reason why some find them a poor substitute for desktops. For example, let’s say that a desktop program is also available as a mobile app. With some exceptions, the app version is likely to be missing some features.

When it comes to the key benefits of laptops, storage is at the top of the list. Today, even the cheapest laptops come with either a 128 GB SSD or a 500 GB HDD. Tablets tend to offer 8-256 GB of internal storage, with some high-end models going up to 512 GB.

Of course, there’s also the matter of expandable storage. With a single micro SD card, you can increase your tablet’s storage capacity to as much as 1 TB. Laptops have memory card readers as well, but you’re better off using an external HDD or SSD.

Most tablets can endure 8-12 hours of active use. Laptops tend to last 3-6 hours, though it depends on what you use them for. Again, some high-end laptops do much better in this regard, with batteries that last over 12 hours.

The main reason why tablet batteries generally last longer is that they use ARM CPUs. They’re less power-hungry and generate less heat than desktop CPUs. This makes them ideal for tablets, phones, and other devices that provide no active cooling.

Both laptops and tablets come with built-in cameras of comparable quality. That said, tablets have a natural advantage here due to being portable. Tablets also have two cameras (front and rear), whereas most laptops only come with one.

As with most factors on this list, price does come into account. Expensive laptops will almost certainly have better cameras as well. This can be a big help with video call chat apps.

Cheaper laptops have comparable performance to laptops in their price range. As the prices increase, the gap widens. When you get to mid-range laptops, the difference in performance becomes obvious.

If you’re planning on using your device for web surfing and multimedia playback, a tablet will do fine. If you need more computing power for work, a laptop is the better choice. Laptops are also better for gaming, though a desktop is still king in terms of value.

Interface-wise, laptops, and tablets couldn’t be more different. On top of having touchpads for input, laptops support all desktop peripherals as well. If you want to use a mouse or external keyboard on your laptop, nothing’s stopping you.

Tablets are more limiting in this regard, as they rely on touchscreens and virtual keyboards. Therefore, this category depends on what kind of input you prefer. KB&M controls are more precise, but touchscreen controls are arguably more intuitive.

Connectivity refers to both physical ports and wireless connectivity. When it comes to the latter, all modern laptops have Wi-Fi and Bluetooth capabilities. Ports depend on the laptop type, with bulkier models supporting USB 3.0, HDMI, Ethernet, etc.

Tablets also feature Wi-Fi and Bluetooth, with many models offering cellular connectivity as well. Ports include a selection of Micro USB and USB-C connections. Again, only you can decide which ports are the right fit for your needs.

Video gaming is also a considerable plan, and thousands of games have been released for both operating systems; you can have a better gaming experience on laptops because we have a lot of amazing games that are released for laptop PCs, GTA series is the most rated gaming series available for laptop PCs, and it has many versions released in different years.If you want to enjoy gaming on your laptop, perform several actions, and download GTA Vice City game for PC right away.Gaming for Tablets is similar to Android gaming or iOS because Tablet device also works like Android device, but has a bigger size. PUBG is the most popular Tablet game, but make sure you have a good processing tablet since PUBG is a very heavy game.

Have you recently googled, “Should I get an iPad or Macbook?” If so, one of the main things that likely caught your eye was their price. Modern iPads will set you back $329-$559, whereas a new Macbook will cost at least $950.

This is a good price comparison point for laptops and tablets in general. Tablets start at much lower prices, with laptops dominating the high-end market. If you’re on a tight budget, a cheap tablet will likely be as good or better than a cheap laptop.

Tablet vs Laptop: What’s Best for You?

So, which is better: a tablet or laptop? As with everything else in life, the answer depends on what you intend to do with it.

Tablets are light, compact, portable, and likely come with a better display. These factors make them a better choice for casual use. If you want your device to serve as a workstation or gaming machine, go with a laptop.

Want to know more about the various benefits of tablets and laptops? Interested in the history of the tablet vs laptop debate? Check out the rest of our tech section!