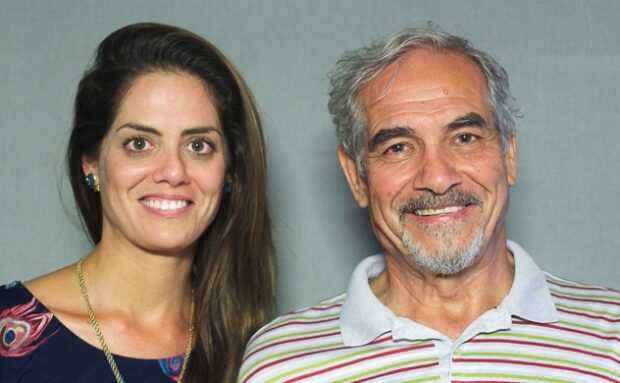 I Have These Dreams Where I Go Back.’ Dad And Daughter Mourn A Syria They Once Knew

Walid Sakaan last visited his home country of Syria in 2010. In 1966, he moved to the U.S. at the age of 21 and settled in Memphis where he raised his family.

His daughter, Magda, was in her 20s when she left Memphis for Aleppo, where her father, Walid, was born and raised.

When the Syrian civil war began 10 years ago this month, Magda headed back to the U.S. Since then, at least half a million people have been killed — although estimates vary — and over 13 million displaced.

Neither she nor her father have returned to Syria.

In 2019, the two came to StoryCorps to remember both the country and the people they love.

“I’d always wanted to know your family,” she told her father, “and as soon as I landed, I was home.”

Walid, 76, described the Aleppo he knew growing up, a “real old city” where he was one of 11 siblings.

“It’s built of chiseled limestone with cobblestones on the streets,” he said. “When I was young, my older sister, Hamida, she’ll put me on her shoulder and carry me. I remember this as the warmest, warmest moments.”

While in Aleppo, Magda remembers how much her Aunt Hamida missed her brother, Walid.

“Aunt Hamida, she’d take my phone and look at the pictures of you and just kiss your face on the phone screen and cry,” Madga told her father. “When I first moved there, I had no idea what she was saying, but you could understand the love that she had for you.”

Walid Sakaan (center, bottom) with most of his 11 siblings in Aleppo, Syria, in 2006.
Magda Sakaan
Magda, who had planned to stay in Syria for six months, ended up living there for four years. “I loved it,” she said.

“I had to go get you almost out of there,” her dad told her.

“We both left not thinking that it would be the last time that we’d see a lot of people,” Magda said.

Walid, lamenting how much of Aleppo was destroyed in war, said, “I cannot talk about it without feeling like crying.”

Even after returning to America in 2011, Magda said, “All I wanted was to go back. And then, as it got worse and I realized that wasn’t possible, that was when I really mourned it.”

“I have these dreams where I go back, and all of us, all my sisters, brothers, all of us are in the old house having a kharouf,” he said, referencing the Arabic word for lamb.

“The whole sheep,” Walid said. “I don’t want it to end. I want to close my eyes, realize that it is a dream and I want to go back.”

“But we need to talk about happy things.”

Audio produced for Morning Edition by Lauren Smith and Mia Warren. NPR’s Emma Bowman adapted it for the Web.

I Have These Dreams Where I Go Back.' Dad And Daughter Mourn A Syria They Once Knew