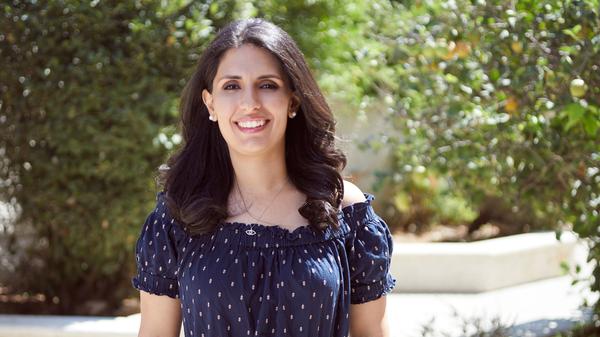 Home » For This Palestinian Cook, The Kitchen Is A ‘Powerful Place’ — Not A ‘Life Sentence’
Blog

For This Palestinian Cook, The Kitchen Is A ‘Powerful Place’ — Not A ‘Life Sentence’

Growing up in East Jerusalem, Palestinian cookbook author Reem Kassis never expected to enter the food industry. For her, the kitchen represented a “life sentence” for women.

Instead, Kassis moved to the U.S. when she was 17, first studying business at the University of Pennsylvania’s Wharton School and then at the London School of Economics. It wasn’t until she had a child that she began to see the kitchen as a “powerful place” where she could share important stories about food and culture with her daughter.

Give Chickpeas A Chance: Why Hummus Unites, And Divides, The Mideast

Give Chickpeas A Chance: Why Hummus Unites, And Divides, The Mideast
Kassis says that many foods that are considered Middle Eastern or Israeli actually originated as Palestinian dishes. Her first cookbook, The Palestinian Table, chronicled the history of Palestinian food — along with some of her personal history. In her new book, The Arabesque Table, Kassis expands the focus to the cross-cultural culinary history of the Arab world.

On her identity as a Palestinian being inherently political

It’s comical because all it takes is for me to use the word “Palestinian” and anything that I want to talk about — no matter how far removed from politics — suddenly is political. But at the same time … as Palestinians, as a people that do live under occupation, who are fighting for justice, it’s hard to separate that reality from anything else that we do. Every person goes about it in a different way. I am in the food and writing world, and that’s how I try to address or deal with that issue, from that angle. And someone else in a different sphere might deal with it from a different angle. … It can be a land mine, but it shouldn’t be. … Food is the lowest common denominator we all have. … Regardless of where you come from or what religion you are or what your beliefs are, you have to eat. But do I believe that food can bring people together? I think that’s a stretch.

On the controversy about the origin of hummus

Hummus itself is controversial abroad because just a few decades ago, nobody knew what it was. When my husband would take it to school, people would make fun of him for eating this beige paste. Now, suddenly, since the late ’80s, it’s become much more popular and recognized abroad as Israeli. And I think that’s where the controversy happens. …

This is a dish that is inherently Arab, and abroad it’s being marketed as Israeli — without any mention to those origins. … When I’m here and I see something that I know is such an important part of my culinary identity being appropriated as Israeli, it feels almost like adding insult to injury and willfully saying that I don’t exist, that I don’t have a past, that I was never there or part of the history. So I’ve said this before, it’s not about the chickpea itself, it’s not about the dish, it’s more about what that omission signifies to people like me who are Palestinian, who see our history being sidestepped completely and ignored abroad.

On the Arabic bagel

Kassis explores the cross-cultural culinary history of the Arab world in her cookbook The Arabesque Table. Shown above (clockwise from top left): sujuk fried eggs; “secret” Shankleesh salad; fried Arabic white cheese; and labaneh, red chili and egg salad.
Dan Perez /Phaidon Press
I actually also always assumed it originated with the Ashkenazi communities in Eastern Europe. And then I started doing the research for this book … and part of the research involved looking through ancient medieval Arabic cookbooks. And I’m flipping through one of them from the 13th century, and there in a chapter on bread, I see a section on ka’ak, which is a ring-shaped dough that Arabs used to make centuries ago. And I’m reading, and in there it says, “Take these ring-shaped doughs, put them on a dowel, boil them in water and then bake them.” And that essentially is what a bagel is today.

So once you start digging deeper, you realize the bagel can be traced back, and this is done by a lot of Jewish researchers, they trace it back to Poland in the 16th century. In Poland, however, they trace it back to their royal family to the 13th century. And then when you look, who married into that royal family, it was a woman who came from Bari, Italy, and Bari, Italy, in the Middle Ages was … [a] stronghold of the Islamic Empire, and from there, the cuisine of Europe was influenced heavily by Arab traders and the conquest of that region. So you start to see how the bagel, in its original form, traveled across the world. And then you also see very similar versions of it in China where the trade routes also went. And then you realized the thing connecting all those was their origin in those Arabic cookbooks, that fact of boiling a piece of dough before baking it.

I think a lot of times you take things for granted as a child — and I definitely did that with my mother’s cooking.

I think a lot of times you take things for granted as a child — and I definitely did that with my mother’s cooking. My daughters do the same with mine. But once I left and I arrived in the U.S., there was a bit of culture shock for me. Part of it was seeing how I’m eating on my own in the dining halls. There isn’t that familial feeling of having everyone eating together and then the food itself. I started to crave it. I missed it. I missed not only the taste and the flavor, but the entire feeling around it. And that’s when I started actually tinkering with cooking, and I would call my mother and ask her for recipes. So it started out simple.

I remember the first dish that I wanted to make was maqluba, that inverted rice and vegetable dish. … I think I called her maybe 15 times in the span of two hours, [and] at one point she said, “It’s cheaper for me to fly over and cook it for you than to have to keep answering your questions about how to make it!” But I remember eating it then, and somehow it gave me a sense of satisfaction of being closer to home. And even if just for a little bit, that nostalgia that I had was placated just by eating that dish.

Za’atar: A Spice Mix With Biblical Roots And Brain Food Reputation
THE SALT
Za’atar: A Spice Mix With Biblical Roots And Brain Food Reputation
Za’atar is an herb in and of itself, and it’s from the oregano family. What ends up happening here is when people say za’atar, they are referring to the condiment made from that herb, mixed with sumac, sesame and salt. And sometimes people will call it thyme, but it’s actually not thyme at all. It is much, much closer to oregano than it is to thyme. And the reason it’s misunderstood is people probably don’t realize it’s an actual plant. So we do make a condiment from that plant, and we creatively call it by the same name as the plant, but we also use it in other applications. We use it in doughs, different types of bread and pastries. We use it to make teas as well. And of course, the condiment is probably the most widely used and recognized … mixed with sumac, sesame seed and salt, and it’s probably present on every table in any Palestinian, Syrian, Lebanese, Jordanian household. And it’s your go-to breakfast: You dip pita bread in olive oil and za’atar, and you’re good to go.

On developing a friendship with Israeli chef Michael Solomonov (known for his award-winning Philadelphia restaurant, Zahav)

The first time I ever ate at Zahav … [I had] a dish that very much reminded me of one that my mother makes, freekeh. And I remember part of me feeling satisfied that I had eaten this dish that tasted of home and another part had felt extremely frustrated. Why am I eating the best Palestinian dish I’ve had since coming to the U.S. in an Israeli restaurant?

For Israeli-Born Chef, Hummus And ‘Tehina’ Are A Bridge To Home
THE SALT
For Israeli-Born Chef, Hummus And ‘Tehina’ Are A Bridge To Home
And then you fast-forward 10 years, and I’m writing this book on the one hand, yes, to safeguard our culture for my daughter and our culinary history, but in part also to show the world that this is our food that we’ve been eating for generations before Israel was even a state. And so when my book came out, I sent Mike [Solomonov] a copy of the book with a handwritten letter in part to say, “This is our food. This is what we’ve been cooking.” … And I think he was very touched by that. I didn’t expect to hear from him when I sent the book, but he reached out and said, “I was very moved by your book,” and he wanted to meet for coffee. And we did. And I was surprised to realize how many things get lost in translation. You see Mike, and you think he’s the face of Israeli cuisine. He must deny the Palestinian origins of the food he serves. He must be anti-Palestinian, so on and so forth. And once you get to know someone on an individual level, you start to realize how many misconceptions you probably hold of that person. And that’s the beginning of that friendship.