After nearly a decade of revitalization under the ownership of the multibillionaire Jeff Bezos and the newsroom leadership of Martin Baron, The Washington Post announced on Tuesday that it had selected Sally Buzbee, the executive editor of The Associated Press, as its next top editor. 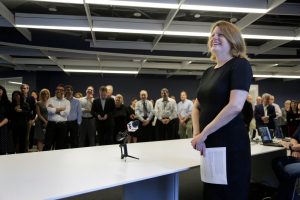 Ms. Buzbee, who is scheduled to start on June 1, will be the first woman to serve as The Post’s No. 1 editor since the paper started publishing in 1877. “It will be an honor to lead this incredible group of journalists,” she said in a statement on Tuesday.

Ms. Buzbee, 55, has spent her career at The A.P., starting in 1988 as a reporter in Topeka, Kan., and becoming its executive editor and a senior vice president in 2017. Along the way, she led the organization’s coverage of the Iraq war and other regional conflicts as its Middle East regional editor, based in Cairo. As Washington bureau chief, she oversaw The A.P.’s coverage of the 2012 and 2016 elections.

Frederick J. Ryan, The Post’s publisher, said that Ms. Buzbee distinguished herself in a field of impressive candidates for one of the most coveted jobs in journalism. “She is widely admired for her absolute integrity, boundless energy, and dedication to the essential role journalism plays in safeguarding our democracy,” he said in a statement.

Ms. Buzbee’s next assignment will be to build on the gains made at a publication that has been restored to health under Mr. Bezos, who bought The Post in 2013, and Mr. Baron, who led the paper to 10 Pulitzer Prizes and other journalism awards during his eight years at the helm.

It is a much different paper from the one Mr. Baron inherited when he was brought in by the previous ownership, the Graham family, which had owned it for some 80 years before selling it to the Amazon founder for $250 million.

Since Mr. Bezos’s arrival, The Post has become a digitally savvy news operation with more than 1,000 journalists on staff, up from 580 in 2013. Its audience has also increased from a daily circulation under 500,000, the seventh largest readership of any American paper, to three million digital subscribers, second only to The New York Times.

The increased size, speed and scope of The Post is not likely to faze Ms. Buzbee. The news agency she has overseen the last four years has 250 bureaus in 99 nations. It provides roughly 730,000 articles, 70,000 videos and one million photographs each year to the more than 15,000 outlets and businesses that subscribe to its content.

The A.P. also has a leading role in presidential elections, with 4,000 reporters collecting vote counts from county clerks in 50 states to help it make the call on who, in its determination, will be the next president — a role it has played in every election since 1848.

The Post’s search for an executive editor, led by Mr. Ryan, started at the end of January, when Mr. Baron gave a month’s notice, saying, “At age 66, I feel ready to move on.” Mr. Bezos met with final candidates in recent days, and Ms. Buzbee said she had an interview with him in Washington before signing on for the job.

“Every indication I’ve gotten, everything I’ve seen, is that he believes in the importance of an independent newsroom,” Ms. Buzbee said of Mr. Bezos in an interview on Tuesday.

Today in Business
Live Updates:
Updated
May 11, 2022, 1:13 p.m. ET9 minutes ago
9 minutes ago
Hearst sells Marie Claire to a British publisher.
Fed officials maintain a patient tone even as critics fret about inflation and bubbles.
Today in On Tech: Why is new TV so much like cable?
She said it was “a huge honor” to be the first woman to lead The Post’s newsroom.

“Every day when I work, I am conscious of the women who came before me in this profession that we love so much and who broke down so many barriers,” Ms. Buzbee said. “And I am grateful to them pretty much every day of my life, because I know that it took work and guts, and I really do feel that they paved the way for things that are happening now.”

Ms. Buzbee was also considered this year for the top newsroom job at The Los Angeles Times, which went this month to ESPN’s Kevin Merida, a former managing editor of The Post.

She was born in Walla Walla, Wash., and grew up in the Bay Area and the suburbs of Dallas and Kansas City. She graduated from high school in Olathe, Kan., before getting a journalism degree at the University of Kansas and an M.B.A. from Georgetown University.

Her husband, John Buzbee, a Foreign Service officer and Middle East specialist, died in 2016. Her father-in-law, Richard Buzbee, who died in 2018, was the publisher and editor of The Hutchinson News and Olathe Daily News in Kansas.

“We are sorry to lose Sally but very happy for her as she takes this next step in her career,” he said.

During Ms. Buzbee’s time as executive editor, The A.P. won a Pulitzer Prize in the category of international reporting for its coverage of the conflict in Yemen and another one, for feature photography, for its work in Kashmir.

Ms. Buzbee landed one of the biggest jobs in journalism during a time of increased diversity in top positions at major news organizations, a change that has come about after many newsroom employees have questioned the leaders of media companies about the makeup of their staffs and executive ranks.

Ms. Buzbee said she focused on “diversity and inclusion” during her tenure at The A.P. “Everybody brings their own background and experiences to journalism, and that enriches journalism,” she said in the interview. She cited an initiative in which employees in nonmanagerial roles became “inclusion champions,” a group that helped the company emphasize a wider variety of voices and subjects.

Ms. Buzbee credited her time in the Middle East with solidifying her commitment to a life in journalism.

“I really learned to stand on my own two feet and have some resilience,” she said. “I learned more courage when I went to the Middle East, and I don’t mean physical courage. I just mean the courage to pursue great journalism. That’s when I thought, I’m in this for the long haul.”

She added, “I love journalism so much, I can’t stand it.”