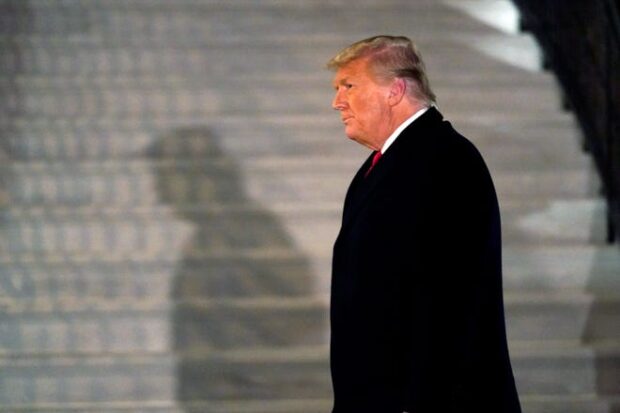 WASHINGTON – Donald Trump will have to stick to written statements and media appearances to raise money and spread his messages – social media is broadly still not an option, at least for now.

Facebook’s decision to maintain its ban on Trump again deprives the ex-president of a long-range megaphone and an effective fundraising machine, elements that would be central to Trump-backed campaigns in the 2022 congressional races and, perhaps, the 2024 presidential race.

Will former President Donald Trump remain banned from Facebook and Instagram? The decision from Facebook’s Oversight Board comes Wednesday.
In his written statement following the Facebook decision, Trump called the social media bans “a total disgrace,” and he threatened vengeance on the private companies at some future date. He claimed “free speech” had been taken away from him, because the political left is “afraid of the truth.”

” …The truth will come out anyway, bigger and stronger than ever before,” he said.

With allies vowing to make “Big Tech” a major political issue, Trump said “these corrupt social media companies must pay a political price.” He was not specific about what that should be.

More:Facebook ban on Trump upheld by Facebook Oversight Board, but decision opens door to his possible return

Trump can play the victim all he wants, analysts said, but Facebook had little choice but to keep him offline given his constant violation of its rules.

“He has only himself to blame for actively promoting pernicious lies and conspiracy theories and for being an online bully,” said Lara Brown, director of the Graduate School of Political Management at George Washington University.

Brown said Trump can try to start his own social media company, but “it is unlikely that he would ever be able to garner the attention or generate the reach that he was able to on Facebook.”

Trump aides insisted they can still raise money – his Save American PAC has raised more than $85 million – and his voice will continue to resonate in the 2022 elections and beyond.

A day before the Facebook decision, Trump launched a new website on which he posts his written statements, included his new comments on the maintenance of the social media prohibitions.

It will be harder for Trump to communicate effectively without social media, however, given its importance in his political rise and presidency.

Trump opponents hailed the Facebook decision because the former president continues to lie about his election loss to President Joe Biden.

In a written statement Monday, Trump sought to appropriate the term others use to describe his bogus claim that the election was stolen, referring to it as “The Big Lie.”

Rick Hasen, a professor specializing in election law at the University of California at Irvine School of Law, said Trump’s communication strategy would be very different if Facebook opted to let him back on.

Rep. Liz Cheney, the number three Republican in House leadership, Cheney criticized Trump over his Monday statement by tweeting that anyone who is “spreading THE BIG LIE” is also “turning their back on the rule of law, and poisoning our democratic system.”

While Trump’s Twitter feed was more famous – or infamous – his team made more use of Facebook to raise money and spread messages for the 2016 and 2020 campaigns,

Americans are almost evenly divided over Trump’s ban from social media – and, in a familiar pattern, most of the split is along party lines.

“Some 49% of U.S. adults say Trump’s accounts should be permanently banned from social media, while half say they should not be,” said a recent Pew Research Center poll.

Facebook and others said too many of those messages were lies, including ones that helped trigger the Jan. 6 insurrection at the U.S. Capitol – an incident the Facebook board cited in maintaining its ban.

Mercieca, author of “Demagogue for President: The Rhetorical Genius of Donald Trump,” said his “loyal followers” are the one reason he still has “any political power” at all.