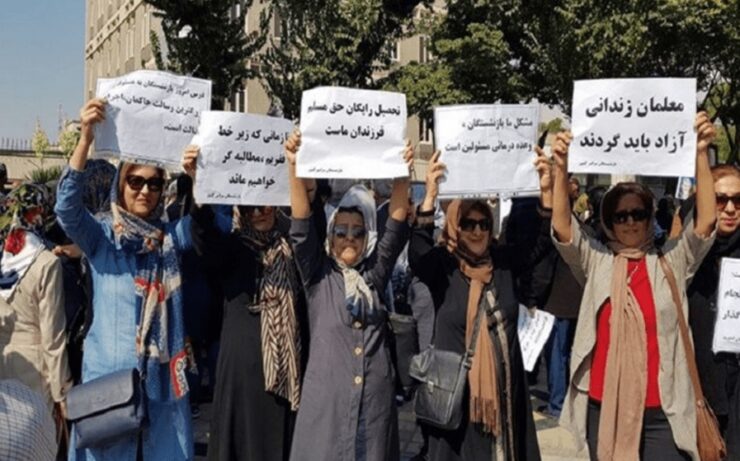 Throughout May, the streets of major cities in Iran were the scene of protests by Iranian women chanting ‘NO’ to the regime’s next presidential election farce.

Unemployment, water shortages, power cuts, cultural and social corruption, and home demolition by the authorities were among the reasons for the protests.

The electoral boycott, supported by the MEK Iran is one of the main slogans of all these protests. By shouting “we will not vote again”, the demonstrators attest to the absolute illegitimacy of the sham election.

Women, members of MEK Iran are holding anti-regime campaigns in various cities in Iran, calling on the Iranian people to boycott the mullahs’ sham elections. The MEK Iran firstly launched this campaign which has been welcomed by the public. Now, it is turning into a nationwide movement.

A female MEK Iran activist inside Iran, who parallel to her job as a nurse, is taking risks by joining the election boycott campaign, was interviewed by the Express daily on June 6.

The 37-year-old Shirinsaidin the interview that at night she has been distributing leaflets urging for a boycott of the sham elections.

The demonstrators also shouted at the leaders of the regime by chanting slogans such as “Down with Rohani”.

Protests and demonstrations of Iranian women

From MEK Iran indicate that during the month of May, Iranian women held at least 127 protests.

For their part, retirees in the health sector want pensions equal to those of employees. In their slogans, they protested against their empty baskets.

Female students took part in at least 42 protests this month against face-to-face exams. They are asking for online exams.

Nurses and hospital staff also held protests because they have not received payment of wages and benefits during the coronavirus outbreak.

The brave and courageous women, members of MEK Iran, continued with their resistance, protests, and the boycott of the sham elections in cities across Iran every day.

Signs on roads and highways and anti-regime graffiti were put up on the walls by the Iranian women, calling for a boycott of the electoral farce across the country.

Leaflets with the messages“The electoral boycott is a patriotic duty” were distributed by women and young people, members of the MEK Iran, from May 18 to 22, 2021. They also wrote on the city walls the slogan: “I vote for the overthrow of the regime”.

Women and girls from MEK Iran took videos of their activities and post them on social media. These bold actions shine hope in the hearts of Iranians and crack the walls of fear and repression in every city.

Iranian women are determined to overthrow the regime at any cost, although the western governments’ are turning a blind eye to the flagrant violations of the human rights of Iranian people. The MEK Iran, claim that the United Nations and the world governments should support the Iranian people.