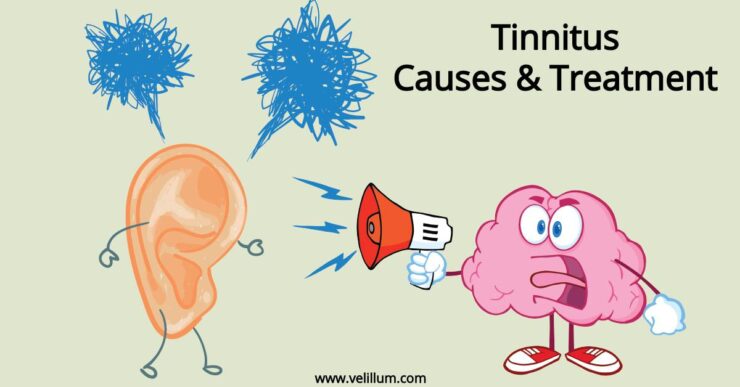 Ringing in ears, as people casually call it, is actually a clinical condition called Tinnitus. If a person perceives sounds which don’t exist in the outer environment, it is Tinnitus. And it prevails throughout the world, affecting about 10% to 15% of the world population. The research studies for finding the ideal Tinnitus treatment are going on but it is hard to identify one common treatment for all the different underlying causes.

Tinnitus is not a disease but it is a symptom of some underlying physiological or psychological problems. We come across a lot of sounds every day but not all of them are heard or perceived by the brain. This is a unique filtering mechanism in place which helps us listen to a speech, music, and even noise.

So, if there is a disturbance in the regular functioning of the ear, because of structural or psychosomatic causes, it may result in Tinnitus. Tinnitus Treatment varies from person to person as there are so many possible causes of Tinnitus.

Also, read: Biohacking and its uses

The potential consequences of having Tinnitus can be devastating for some and there are multiple ways in which Tinnitus can impact an individual and his/her life.  Each of these dimensions can exist on their own or feed into each other. A vicious feedback loop can be created reinforcing the distress experienced by the person with Tinnitus.

The person with Tinnitus can feel a myriad of emotions.  These include feelings of depression, anger, resentment, irritability, anxiety, fear, distress, panic, hopelessness, helplessness, frustration, worry, isolation, and loneliness.  Due to the potential changes in the person’s life, grief reactions are experienced in response to these losses; especially the loss of silence. Some people feel that they cannot imagine living the rest of their life with the ‘sound’ and question the purpose and value of their life.  It is vital that if you have any thoughts of suicide, that you will immediately contact a medical professional, therapist, go to the hospital or contact a loved one who can help keep you safe. Support and guidance on how to become less overwhelmed are available and you do not have to go through this alone.

People with Tinnitus can find themselves withdrawing from previously enjoyed social interaction and activity.  Some might believe that family and friends don’t always understand and decide that it might be easier just to decrease contact rather than try to explain a condition that has no visible signs of discomfort.  Avoidance behaviors can also come in the form of sleeping more or ‘self-medicating’. Increased isolation from people, places, and things, however, will only serve to create more time to ruminate, worry and feel more depressed.  Loved ones of the person with Tinnitus are impacted socially as well. They too will experience losses due to their partner’s withdrawal from them and aspects of their life together.

Sometimes the Tinnitus is a result of an occupational accident as in the form of a loud explosion or constant exposure to high levels of sound.  There can be changes in identity, role, income, and employment when the Tinnitus prevents the person from effectively doing their current job or when the distress is so overwhelming that their functioning and performance is affected.  Changes of this nature can affect a person’s sense of purpose and self-worth and can contribute to the development of depression.

Relationships can experience increased conflict and strain due to changes in communication and interaction with others in general.  The tinnitus can feel like an “intruder” in the relationship and resentment, disappointment, and loneliness can be experienced.

Stress is experienced by those with any chronic medical condition and is a factor in exacerbating symptoms.  These symptoms could manifest physically in the form of increased headaches, muscle tension and other somatic complaints.  Sleeping is disturbed for many as it is either the only ‘escape’ from the sound, or it is a ‘sound nightmare’. Impaired sleep can lead to increased irritability, anxiety and stress; again aggravating the Tinnitus.

No one can ever be prepared for the tremendous impact, disruption and despair that can be brought about by a chronic medical condition.  For some people, it can create an inner struggle around beliefs and faith. You may feel abandoned, angry and confused as you try to search for answers to the “why” questions and try to find meaning and purpose in something unseen and only heard by you.

Life is full of challenges of all kinds. Have you noticed though why some people seem to carry on and even find positive meaning in the situation, while others struggle? While the ability of

Some people to meet life’s challenges with calm directness might be explained by a more easygoing personality, there is more to it than that and in fact, it may partially explain why some people may cope better than others. What we tell ourselves about the situation has a powerful, impact on how we may experience the situation.

The good news is that there are some strategies that can be learned to help all of us manage life’s unexpected events with more confidence and less stress.

These strategies can be put to use in any challenging situation, including and extending beyond the management of health issues. One way to reduce the impact of an ongoing health issue, including tinnitus, is to become aware of the language we use when we are thinking or talking about the various ways the condition may be impacting your life. For example, if we say to a friend or professional that “I Suffer from tinnitus”, we only reinforce our belief that we are the victim of something that we have absolutely no control over.

While it is true that presently there is no ‘cure’ for tinnitus, there are numerous proven management techniques that allow us to gain a sense of control over this condition and these techniques can be learned.

In no way are we trying to suggest that the tinnitus has not had a significant impact on many areas of your life.

Activities that you once enjoyed may bring you less pleasure and the silence that you once took for granted is now something you crave. However, by using words and Phrases with less emotional impact, you will experience decreased negative emotions related to the tinnitus, which will, in turn, leave you calmer, more in control, and less anxious?

When we think of or describe ourselves as ‘suffering’, we begin to see ourselves as trapped and helpless, with no hope of improvement, a belief that unfortunately may have been reinforced when one or more professionals told you that there was nothing that could be done to help. By becoming more aware of the way we talk about the tinnitus, we can rephrase our statements so that the message we are giving ourselves is more neutral or positive, and therefore more Hopeful. For example, rather than saying “I suffer from tinnitus”, try “I find the tinnitus challenging a lot of the time”.

Whenever there is a possibility of improving a challenging situation, we experience the wonderful feeling of HOPE. Hope is what motivates us to carry on, rather than giving up.

It is the possibility that there are better days to come and empowers us in the knowledge that we have control over our reaction to a situation that we may have come to believe has controlled us and our lives. So listen to your words when you talk both out loud and to yourself… Simple changes in the language you use can significantly reduce the emotional impact that the tinnitus has on your Life.

As we discussed earlier, the research is going on to find an effective Tinnitus cure. But as of now, the best tinnitus treatment is to identify its underlying cause and reduce the severity of the symptoms. There are so many ways to manage the Tinnitus symptoms effectively.