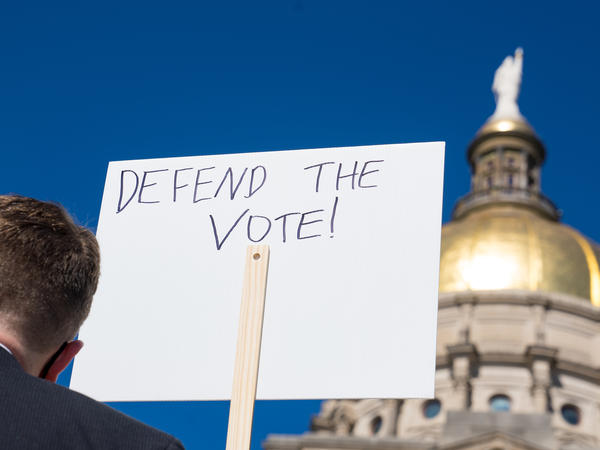 One week after it was signed into law, Georgia’s Republican-led voting overhaul is facing backlash from a growing number of corporate voices, including several of the state’s most prominent companies and Major League Baseball.

Critics of the legislation say it will restrict voter access and disproportionately affects people of color, with President Biden slamming it as “Jim Crow in the 21st century.”

In a Wednesday interview with ESPN, Biden said he would support MLB moving its All-Star Game in July out of Atlanta. Tony Clark, executive director of the Major League Baseball Players Association, first raised the idea last week, and it’s not without precedent — as ESPN noted, the NBA moved its 2017 All-Star Game out of Charlotte after North Carolina enacted a bill limiting anti-discrimination protections.

“I think today’s professional athletes are acting incredibly responsibly,” Biden said. “I would strongly support them doing that. People look to them. They’re leaders. … This is Jim Crow on steroids, what they’re doing in Georgia and 40 other states.”

While many Republicans, including Georgia Gov. Brian Kemp, say the state’s legislation will help ensure election integrity, civil rights advocates say it disenfranchises voters of color. Three groups have already filed lawsuits, alleging that certain parts of the law are discriminatory and unconstitutional, and arguing that many of the changes disproportionately harm Black voters, as Georgia Public Broadcasting reported.

Dozens of companies have joined in that criticism in recent days, including several that have been facing possible boycotts by voting rights advocates for not speaking up more forcefully ahead of the bill’s passage. Those include Delta Air Lines and the Coca-Cola Co., both headquartered in Atlanta.

Officials from those two companies said they had worked with elected officials from both parties to provide feedback during the legislative process and voice their opposition to measures that would restrict voting access, and said they would keep pushing to protect the right to vote locally and nationally.

James Quincey, Coca-Cola CEO and chairman, expressed disappointment with the legislation’s outcome in a statement Thursday and said the company would continue to work with stakeholders to advocate for change.

“Our focus is now on supporting federal legislation that protects voting access and addresses voter suppression across the country,” he said. “We all have a duty to protect everyone’s right to vote, and we will continue to stand up for what is right in Georgia and across the U.S.”

Biden Signals Support For Voting Rights
POLITICS
Biden Signals Support For Voting Rights
Delta CEO Ed Bastian called the final bill unacceptable, writing in a Wednesday memo to employees that “the entire rationale for this bill was based on a lie: that there was widespread voter fraud in Georgia in the 2020 elections,” a claim that has been repeatedly debunked.

“After having time to now fully understand all that is in the bill, coupled with discussions with leaders and employees in the Black community, it’s evident that the bill includes provisions that will make it harder for many underrepresented voters, particularly Black voters, to exercise their constitutional right to elect their representatives,” he said. “That is wrong.”

Georgia’s governor addressed the corporate backlash in a Wednesday interview with CNBC, saying the legislation will add more opportunities for people to vote on weekends and increase the number of drop boxes statewide, as the legislation requires each county to have at least one.

He also disputed the characterization of a widely panned portion of the bill that criminalizes passing out food or drinks to voters waiting in line, saying that provision only applied within 150 feet of a polling location.

Kemp previously denounced the threat of a boycott in an interview with Fox News, saying he believed it is wrong “to punish hard-working Georgians, great institutions like the Masters [Tournament] and Major League Baseball and other things in our state that, by the way, employ a lot of hard-working Georgians that are trying to fight through this pandemic.”

It’s also coming from outside the state. JPMorgan Chase CEO Jamie Dimon decried the legislation in a statement to CNN Business in which he said the company’s “employees span the United States and as state capitals debate election laws, we believe voting must be accessible and equitable.”

Officials from Facebook, ViacomCBS, Citigroup, Cisco and pharmaceutical company Merck were among those who issued statements restating their support for equitable voting access.

Microsoft President Brad Smith detailed his opposition to specific elements of the legislation in a lengthy blog post that concluded, “We believe it’s important for companies and business leaders to continue to study the 98-page law more closely, take a substantive approach, and voice our views collectively.”

And on Wednesday, 72 prominent Black executives did just that, by publishing an open letter titled “The Fierce Urgency IS Now” as a full-page advertisement in The New York Times. The letter denounced the Georgia law and others like it, and urged “corporate leaders everywhere to speak out against efforts intended to make it harder for Americans to vote.”

“As Black business leaders, we cannot sit silently in the face of this gathering threat to our nation’s democratic values and allow the fundamental right of Americans, to cast their vote for whomever they choose, to be trampled upon yet again,” they wrote.