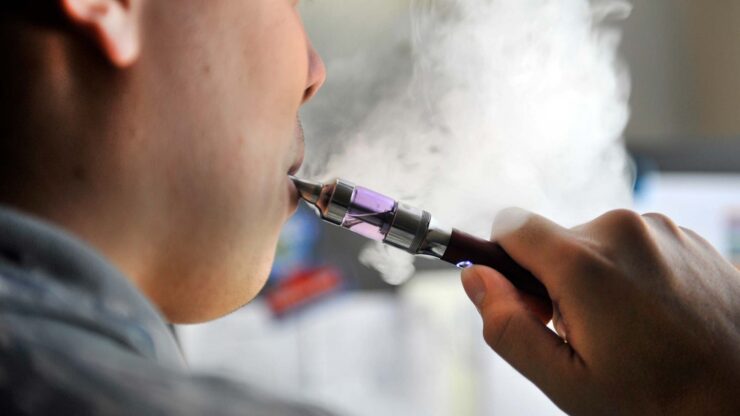 Home » Is E-cigarette Vapor Harmful to Others – 2023 Guide
Blog

Is E-cigarette Vapor Harmful to Others – 2023 Guide

As the world moves increasingly towards a cleaner environment, public health advocates are making it their priority to educate people on the dangers of e-cigarettes. While there is still some debate surrounding the long-term health effects of vaping, recent studies have shown that e-cigarette vapor is harmful to others. In this article, we will provide you with a 2023 guide on how to identify and avoid e-cigarette vapor.

Vaping is the use of an electronic cigarette, also known as an e-cigarette, vape, or pod. E-cigarettes are devices that use a battery, heating element and cartridge to vaporize nicotine, flavorings and other chemicals, producing a vapor that the user inhales.

E-cigarettes, also known as vapor cigarettes, are battery-powered devices that turn nicotine and other substances into an aerosol to be inhaled. They became popular in the 2000s as a way to help people quit smoking traditional cigarettes. But there is still little evidence about whether e-cigarettes are harmful to others.

Some people argue that vaping is just as dangerous as smoking, because both methods of using e-cigarettes produce inhalation of nicotine and other chemicals. Others say that vaping is less harmful than smoking because it doesn’t contain tobacco smoke and it doesn’t create carbon monoxide or other respiratory hazards.

There is no definitive answer to this question as there is significant debate surrounding the safety of e-cigarettes. Some experts believe that they are harmful, while others contend that they are less harmful than traditional tobacco cigarettes. Some people believe that e-cigarettes may be more harmful than helpful in terms of quitting smoking, while others claim that they can help people quit smoking. Vape juice, which is the liquid that is used in e-cigarettes, can contain high levels of nicotine, which can be harmful if ingested or if it comes into contact with the skin. But, when it comes to healthier alternatives to smoking, a vape juice is far better than smoking a traditional tobacco cigarette.

The Effects of E-Cigarette Vapor Exposure on Others

Vapor from electronic cigarettes can be harmful to others when exposure occurs. Exposure can occur through direct inhalation of the vapors, or by contact with skin that has been exposed to liquid nicotine or other fluids that have been vaporized. Vapor from electronic cigarettes contains nicotine, propylene glycol, flavors, and other chemicals. But it is still not clear what specific chemicals are responsible for the health concerns. Vaping is definitely much healthier than smoking, but it’s important to remember that there is still risk of harm when vaping.

Almost everyone knows that smoking cigarettes is bad for your health, but many people are still using e-cigarettes. Although there hasn’t been much research into the long-term effects of vaping, it’s unclear if it is harmful to others. In this article, we will discuss some of the dangers of vaping and give you a guide on how to identify if someone is vaping and whether or not it’s safe for them to be around.

By the time a child becomes a regular student, it usually has already begun its adventure with learning and education in the kindergarten, and even earlier in the nursery. Every parent is pleased with this fact and...