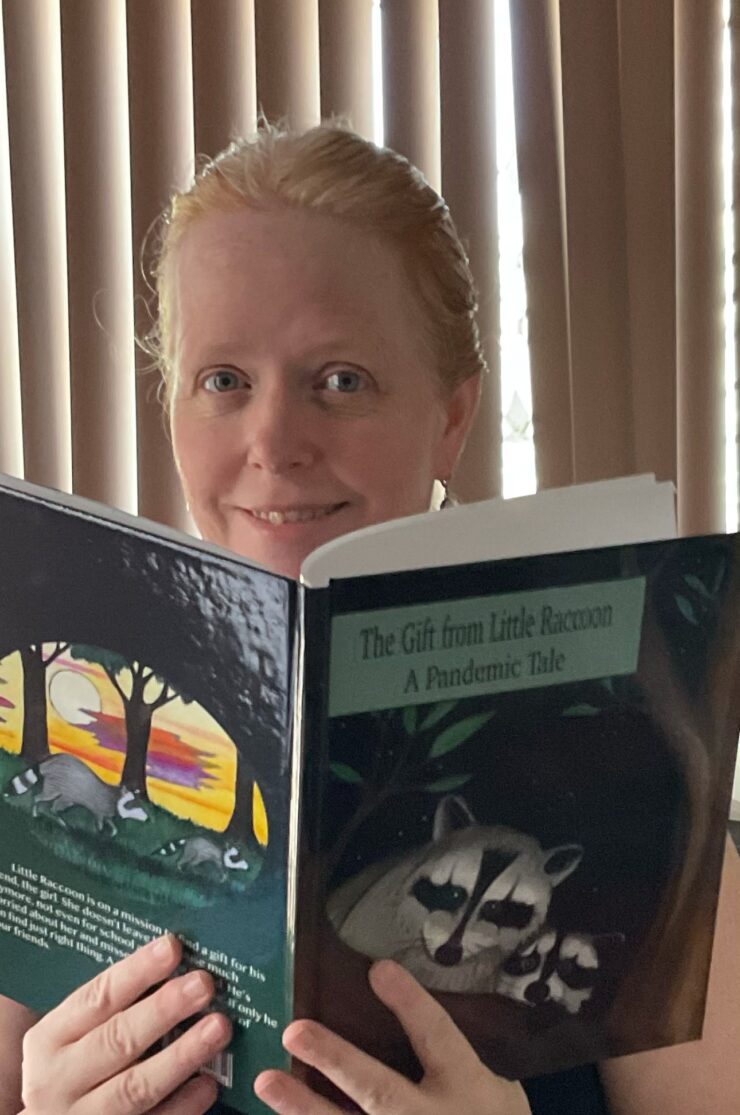 Do you hope to write as good as Roald Dahl one day?

One of my favorite books is “James and the Giant Peach”!! Yes, I do hope to write as well as Roald Dahll.
I think every children’s author hopes this.

Can you name all the reindeer?

I can name all of Santa’s reindeer, Dasher, Dancer, Prancer, Vixen, Comet, Donner, and Blitzen… Also Rudolph (with the glowing facial feature). I cannot name all the reindeer in the world. I also don’t know all the dwarves’ name
\s from Snow White (Happy, Dopey, Hairy? Not sure.)

Ducks can swim, fly and walk, which is a lot of things. I also like that they aren’t geese. Geese have sharp teeth and chase people.

Will you write a story about ducks?

Once upon a time there was a duck who wore a purple hat. It was big and fluffy. He was the only duck that ever wore a hat. The other ducks couldn’t tell he was a duck, all they saw was a terrifying purple creature swimming towards them. Petrified they flew off, leaving the little duck alone in the pond. He swam alone around the pond for two days when it began to rain. His purple fuzzy hat became waterlogged and heavy. It slipped off his head and sank to the bottom of the pond. After the rain all the ducks returned to the pond, happy to see their long lost friend, who they assumed had been taken by the scary purple monster. To this day they tell the tale of terrifying purple creature who was almost as scary as geese.

“What did it feel like on your last day of being a child?”

I felt very excited because the next day was my birthday! The last day of being 17 was good, except for the fact that I was still in the middle of my senior year of high school. Once you’re 18 there’s a bunch of things you can do that you couldn’t the day before. You can buy a lottery ticket, buy cigarettes, vote in an election, and join the army. You still can’t rent a car, book a hotel room or drink alcohol though.

First of all, don’t try to eat your arm. If you lick your arm and it tastes like anything particular, like say, peanut butter, you need to wash-up.

Did Beatrix Potter think up Peter Rabbit in the bath?

Sitting in a bath is incredibly boring, and before cell phones and TV there was very little to entertain you while you did this. So even if she didn’t think of her story while in the bath she at the very least thought about her story during these times. So I would say the answer is yes, yes she did.

How do I know that I’m real and not just a dream of someone else?

Everything we know about our world, our brains have told us. The sky is blue because our brains have perceived the color blue when looking in that direction. Sand is gritty because of our brains. You are hot, cold, sleepy, or excited because of your brain. If you can touch, feel, see, smell, have feelings, with no one else around then I would say you are quite real. If you cannot and only exist when someone else is there, then you have something to be concerned about.

How old do you have to be to write books for grown ups?

You have to be 21 years old….Ok, I’m kidding. If you want to write a book for adults you need to have a larger vocabulary, and more life experience . For example it helps if you’ve ever fallen in love, traveled to different places, tried different kinds of foods, suffered the loss of someone you know. Adults have a wider range of experience than children so writing for adults requires a more layered approach to telling stories.

Why do I have two eyes if I only see one thing?

Well, unlike some birds and lizards, humans have their eyes pointed in the same direction. For example chameleons are spinning each eye around looking at different things at once. Honestly it sounds a bit confusing.

If you get an idea when you’re in the shower how do you write it down?

Well, I have to remember it and write it down when I get out of the shower. The first children’s book I ever had published , “Andy and The Flying Toaster Tangerine” was one I thought of in the shower. I wrote nearly half the book in my head, and jotted it down when I came out. Like I said before, bathing is boring.

Yes, I think so. Though honeybees and termites have elaborate networks as well. I can’t say who was first.

Why is the moon called the moon?”

Isn’t that annoying? Pluto’s moon is called Charon, Jupiter has moons called “Europa” and “Io”and , “Callisto”, and here we are just referring to our moon as “The Moon”. It really doesn’t spark one’s imagination. If you would like to begin a campaign to give our moon a better name, I will help any way I can.

Why doesn’t the sky fall down?

It does. Lots of things fall out of the sky. Aside from rain, hail, and snow, there have been rains of fish, frogs, plastic doll parts and chunks of meat. In fact mysterious rain falls is a big part of the comic book series I wrote called “The People that Melt in The Rain”

Carolyn Watson Dubisch is an author and illustrator of many children’s books and comic books. Some of her most recent titles include “As The Sun Rises, Morning in Mazatlán”, “Fireflies”, and “Andy and The Pharaoh’s Cat”. You can see her author page here or read her webcomic “The Dragon in The Closet” updated each Saturday.