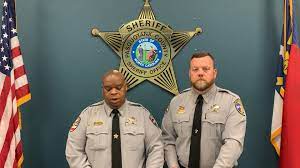 His statement came three days after Andrew Brown Jr., a 42-year-old Black man, was shot and killed by Pasquotank County Sheriff’s Office deputies in Elizabeth City. The events were captured by the deputies’ body cameras.

“I’ve asked the [North Carolina] State Bureau of Investigation to confirm for me that the releasing of the video will not undermine their investigation,” said Wooten. “Once I get that confirmation, our county will file a motion in court, hopefully Monday, to have the footage released.”

In the Facebook video, Pasquotank County Chief Deputy Daniel Fogg said their office has called on the North Carolina Sheriffs’ Association to appoint an outside sheriff’s office to conduct an investigation of all individuals who were involved in the incident.

“A warrant is not a license to kill,” said Barber as he repeatedly called for the release of the body camera footage.

Rivers’ statement came minutes before Wooten posted the Facebook video supporting the release of body camera footage. Wooten has not addressed the media or residents in person since the killing of Brown.

Earlier, on Saturday morning, Elizabeth City Mayor Bettie Parker made it clear she wants to see a major change in how police body camera footage is processed and released in North Carolina.

As they stood outside city hall Saturday, Elizabeth City officials emphasized they have not yet seen or had access to the footage.

When Parker was asked by WUNC what change she would like to see, the mayor answered: “the law.”

Parker said the City Council has submitted a requisition to the county sheriff’s office for the release of the footage. If denied, she said the request would go to the state district attorney’s office and finally to a court.

“This doesn’t make sense. We have to wait forever to get the body cam. Twenty-four hours to 48 hours is enough. So let’s change this,” said Parker. “I want to see it change as quickly as possible.”

Parker said the city’s attorney has told city officials “that more than likely we will not get it.”

At the news conference, city officials emphasized that they want to see transparency and accountability in the events around Brown’s death.

Elizabeth City’s police chief, Eddie Buffaloe, said city police were not involved in the warrants for Brown or the events around serving the warrants