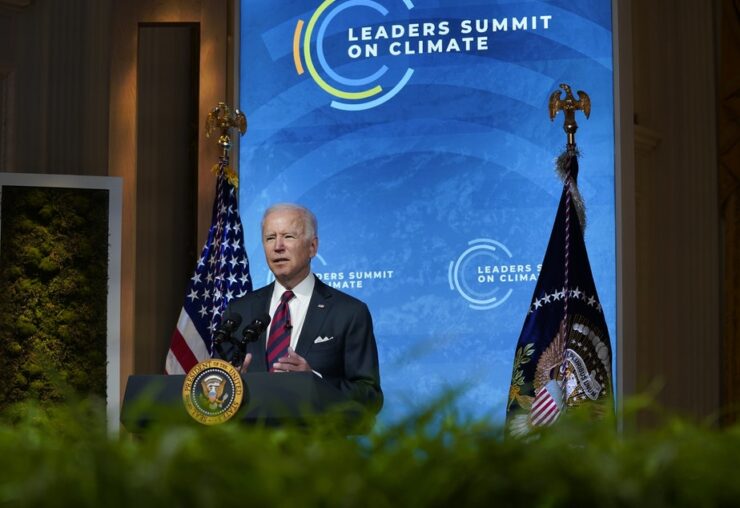 Emphasizing U.S. commitments on climate change and the economic opportunity in confronting global warming, President Biden kicked off the first international summit of world leaders during his presidency on Thursday. He announced that the United States would cut its greenhouse gas emissions in half, from 2005 levels, by the end of the decade.

Biden invited 40 heads of government to a virtual gathering on Earth Day focused entirely on lowering greenhouse gas emissions quickly in order to prevent the worst outcomes of a rapidly warming planet.

Biden and Vice President Harris began the summit with remarks from the White House’s East Room.

As he has repeatedly done, Biden framed the proposed dramatic shift not as a collective sacrifice, but rather, a chance to grow industrial jobs across the country. “I see autoworkers building the next generation of electric vehicles,” Biden said. “I see the engineers and the construction workers building new carbon capture and green hydrogen plants.”

Biden is hoping other leaders will use the summit to announce new, more ambitious, goals to lower greenhouse gas emissions, too.

“China has committed to move from carbon peak to carbon neutrality in a much shorter time span than what might take many developed countries, and that requires extraordinary hard efforts from China,” said Xi. “We will strictly control coal-fired power generation projects. We will strictly limit the increase in coal consumption.”

“It’s vital for all of us to show that this is not all about some expensive, politically correct, green act of bunny hugging. This is about growth and jobs,” Johnson said. “Cake — have, eat — is my message to you.”

Biden’s climate envoy, former Secretary of State John Kerry, spent the weeks leading up to the summit traveling the world, visiting China, India and several other countries, in order to build international support for the event. The White House is framing the meeting as one of several key moments leading up to a November conference in Scotland, where leaders will update the 2015 Paris climate agreement.

The U.S. left that agreement under the Trump administration. Biden began the process of rejoining it on his first day in office.

The summit is a major symbolic step toward fulfilling central themes of Biden’s run for president: a promise to repair the United States’ damaged relationship with the rest of the world and recommit the country to global efforts to stem the damage of climate change.

FAQ: America’s New Promise On Climate
SCIENCE
FAQ: America’s New Promise On Climate
“The U.S. is back in the game,” Biden’s national climate adviser, Gina McCarthy, recently told the NPR Politics Podcast. “Clearly, I wish we didn’t lose the four years of the prior administration, and I wish we could take that time back because the time is now to really make big moves forward. But we are ready and poised to … make a strong commitment.”

McCarthy had told NPR that the summit was “not a time when I think we have to apologize for the past,” and Biden did not directly address the withdrawal from the Paris Agreement.

Biden regularly talked about convening a climate summit during his run for the White House, but because of the ongoing global COVID-19 pandemic, the summit will look and feel very different from the usual gatherings of heads of government.

This 2017 photo from the International Space Station shows smoke from wildfires in Ventura County, Calif. The increasing human and economic toll of extreme weather events will underscore the urgency of President Biden’s message at a global summit focused on reducing carbon emissions.
Randy Bresnik/AP
The summit will be entirely virtual. For one thing, that means participating leaders will be joining in during all hours of the day or night, depending on their location. Secretary of State Antony Blinken acknowledged that fact by beginning his statement by wishing everyone a “good morning, good afternoon, good evening.”

“Time zones don’t make it straightforward,” an administration official conceded on a call with reporters.

A virtual event also eliminates one of the more valuable dynamics of global summits for world leaders: the opportunity to meet one-on-one with each other, and hold information conversations at dinners and social sessions. “We are not having any side Zoom room bilateral discussions happening,” said another White House official.

It also creates more opportunities for technical snags. Harris’s and Biden’s opening remarks were briefly marred by a loud echo. And the summit’s video feed cut away from French President Emanuel Macron in the middle of his remarks, turning to Russian President Vladimir Putin, who sat silently for an awkwardly long period of time before beginning to speak.