Smith and Vlasov will clash for the vacant WBO light heavyweight title at the Osage Casino in Tulsa, Oklahoma on Saturday night. 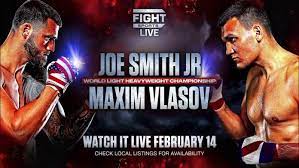 Joe Smith Jr. fell short of becoming a champion in the only time he challenged for a world title, but that was against the undefeated Dmitry Bivol. So, there’s no shame in that.

Now, more than two years since that loss, the blue collar bruiser will once again look to become a world champion when he clashes with Maxim Vlasov for the vacant WBO light heavyweight title. It all takes place Saturday night at the Osage Casino in Tulsa, Oklahoma. The event’s co-feature will pit undefeated heavyweight Efe Ajagba against Brian Howard.

Since losing by unanimous decision to Bivol in March 2019, the 31-year-old Smith has defeated Jesse Hart via split decision in January 2019 — although it clearly should have been a unanimous decision — and then delivered a ninth-round knockout of Eleider Álvarez in August of the same year.

Of course, Smith is still known best for ending the career of Bernard Hopkins by knocking him out of the ring in December 2016, as he holds the distinction of being the only man to ever defeat the boxing legend by stoppage.

Only one man can be crowned world champion. Here’s everything you need to know about Smith vs. Vlasov.

The Smith vs. Vlasov fight card takes place on Saturday, April 10 at 10 p.m. ET/3 a.m. GMT. Smith and Vlasov are expected to make their ring walks at approximately 11:15 p.m. ET/4:15 p.m. GMT, although that depends on the length of the earlier bouts.

Smith and Vlasov will have their WBO light heavyweight championship tilt live on ESPN, while the main card and undercard will stream live on ESPN+.

WHERE IS THE SMITH VS. VLASOV FIGHT?

Smith vs. Vlasov will be held live from the Osage Casino in Tulsa, Oklahoma. Smith has never fought in Oklahoma, however, Vlasov fought at the venue back in 2011.