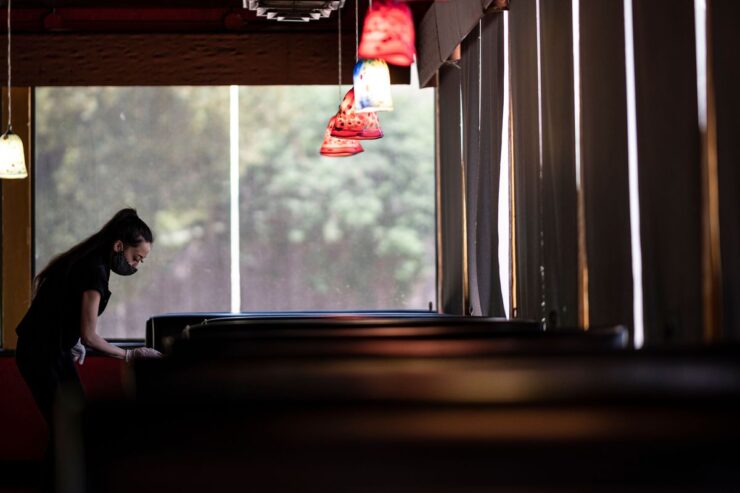 Afghan families have been burying their children who were killed in explosions outside a secondary school in the capital, Kabul, on Saturday.

More than 60 people, mostly girls, are now known to have died in the attack that hit students as they left class.

No-one has admitted carrying out the attack in Dasht-e-Barchi, an area often hit by Sunni Islamist militants.

The Afghan government blamed Taliban militants for the attack, but the group denied involvement.

The exact target for Saturday’s bloodshed is unclear. The blasts come against a backdrop of rising violence as the US looks to withdraw all its troops from Afghanistan by 11 September.

The neighbourhood in western Kabul where the blasts occurred is home to many from the Hazara minority community, who are of Mongolian and Central Asian descent and are mainly Shia Muslims.

Almost exactly a year ago, a maternity unit at the local hospital was attacked, leaving 24 women, children and babies dead.
The BBC is not responsible for the content of external sites.View original tweet on Twitter
line

Heather Barr, who works for Human Rights Watch, tweeted a series of videos and photos of what she said was the school in Kabul – including a tour of the site given by one of the students. Ms Barr said the group had filmed a documentary there in 2017.

Nobel Prize winner and activist Malala Yousafzai – who was shot in the head by the Taliban in 2012 – posted about the “horrendous attack” on Twitter.

“My heart is with the Kabul school victims’ families,” she wrote.
Emotional scenes

The first burials took place at “Martyrs Cemetery”, where Hazara victims are laid to rest.

Mourners in a state of shock watched in grief as the girls’ bodies in wooden coffins were lowered into graves, AFP news agency reported.

One of the residents of the area was quoted by AFP as saying: “I rushed to the scene and found myself in the middle of bodies

“All of them were girls. Their bodies piled on top of each other.”

The explosions are believed to have been caused by a car bomb and two improvised explosive devices planted in the area.

One survivor, Zahra, told reporters she was leaving the school as the blasts took place.

“My classmate died. A few minutes later there was another explosion, and then another. Everyone was screaming and there was blood everywhere,” she said.
People carry an injured girl into a hospital after an explosion in downtown Kabul, Afghanistan, 08 May 2021.image copyrightEPA
image captionA woman is carried to hospital after the attack

More than 150 people were injured in the attack. Reports from Kabul say the city was busy with shoppers ahead of this year’s celebrations for Eid al-Fitr next week.

Najiba Arian, ministry of education spokeswoman, told Reuters news agency the government-run school was open to boys and girls. Most of the those hurt were girls, who study in the second of three sessions, according to Ms Arian.
What’s behind the increased violence?

Afghanistan is seeing increasing violence as the US and Nato prepare to pull out all remaining forces from the country on 11 September.

On Saturday the US state department condemned “the barbarous attack”.

Have things got better in Afghanistan?

20 years in Afghanistan: Was it worth it?

“We call for an immediate end to violence and the senseless targeting of innocent civilians,” it said.

The European Union’s mission in Afghanistan said on Twitter that “targeting primarily students in a girls’ school, makes this an attack on the future of Afghanistan”.
line

So many places in Afghanistan have endured so much pain, but the Dasht-e-Barchi neighbourhood in Kabul has suffered horrendously.

The neighbourhood is populated by members of Afghanistan’s Hazara ethnic minority. As followers of Shia Islam, the Islamic State group (IS) views them as heretics, and has carried out a vicious campaign, attacking the softest of targets.

Dozens have been killed in bombings at sports halls, cultural centres, and places of education in particular.

Last year, and in 2018, IS suicide bombers struck tuition centres in the area killing more than 70 people. IS is not part of the peace talks between the Taliban and Afghan government, which in any case are currently stalled.

As of yet, there’s been no claim for the attack on Saturday. However, IS continues to carry out assassinations and bombings in Kabul and the city of Jalalabad, despite having recently lost much of the territory it once controlled in the east of the country.