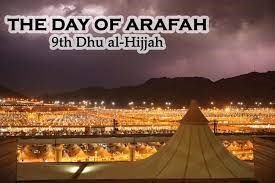 The ninth day of Dhul Hijjah is the Day of Arafah

The ninth day of Dhul Hijjah is the Day of Arafah; since it is on this day, the pilgrims gather at the mountain plain of Arafah, praying and supplicating to their Lord. One hadith says that “Hajj is Arafah” (Abu Dawud). This means Arafah is the sum and substance of Hajj.

In dhul hijjah, Muslims are supposed to fast to get close to Allah, although they are not obliged to do so. A person can fast if they want, but they must continue fasting until the next morning after Eid ul Fitr (feast of breaking the fast), which will be on Tuesday 9th September 2013. But if a Muslim cannot fast Dhul Hijjah, it can be made up later, within the next year.

This day is also known as the day of sacrifice (Qurbani) or Eid ul Adha. Muslims slaughter an animal to commemorate Abraham’s willingness to sacrifice his son Ismail to Allah because Allah commanded him. An adult Muslim who has financial means must offer a Qurbani / Udhiyah(sacrifice) on himself/herself and then give some money in charity to the poor. This meat is shared with friends and relatives after Eid prayers are performed.

On this blessed day, the pilgrims climb Mount Arafat for ‘Wuquf’ (standing still and paying homage to Allah), which symbolizes the spiritual climax of Hajj and, indeed, the climax of a Muslim’s life. The peak of Arafat is also called Jabal al Rahmah (Mount Mercy). That was where Prophet Abraham, upon whom be peace, was tested with the command to sacrifice his son, Ismail, for he showed obedience to Allah despite great hardship and suffering. On this day, water flows from under the sand, and you can see it bubbling up like springs.

“Arafah” (“blocking”), as its name suggests, signifies a time when people physically block themselves off from everything other than God and devote their attention solely to Him. This whole procedure is carried out to remove distractions.

As soon as the sun passes its zenith, pilgrims descend Mount Arafat and head to nearby Muzdalifah. They stone Jamarat (the three pillars representing Satan) in a symbolic rejection of shirk. The pilgrims then gather pebbles, which will be used for the stoning.

Eventually, Muslims return from Muzdalifah to Mina, where they perform ‘Tawaf al-Wada,’ a farewell circumambulation around the Kaaba in the small hours of Thursday morning – just before sunrise.

In dhul hijjah, Muslims are supposed to fast to get close to Allah, although they are not obliged to do so.

Please donate to SKT Welfare that can help in supporting the most vulnerable.