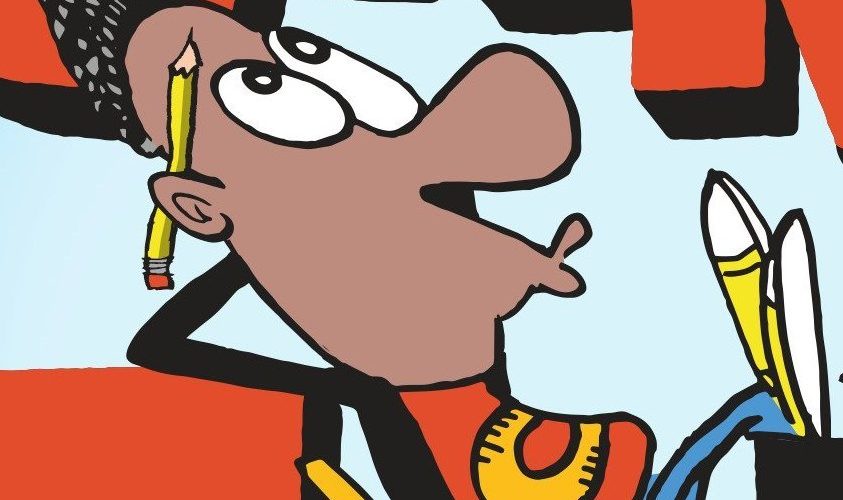 Not Too Rude, Not Too Tame, ‘Jake The Fake’ Is A Just-Right Read

It’s full on tween in this house right now, and sometimes I spend a lot of my day wanting to cry.

And I know it’s my responsibility to get my kids through it. (Hence, the crying.)

One of my son’s driving influences is his overwhelming desire to be funny, just like his dad. Oh my goodness, he wants so much to be funny, and an unfortunate side effect of tweendom is that a lot of his jokes tend to be tinged with meanness or disrespect. He is in the process of learning (I hope) that being mean is not the same thing as being funny, but it’s hard when so many examples say otherwise. Don’t get me wrong, I LOVE Calvin and Hobbes, but when I have my own little Calvin at home, I realize there’s a reason Calvin is so often our INNER voice. Oy.

So the search was on. Could I, as the responsible, empathetic, supportive, and patient parent I attempt to be find just the right book for my son? Something that’s funny without being malicious? Relatable without exploiting bad behavior? A book that encourages my son to tell a joke that won’t warrant having his mouth washed out with soap? I have to admit, I wasn’t confident. There were a lot of false starts, and a LOT of reading aloud at the breakfast table that I could have lived without.

But then (cue triumphant music) … Jake the Fake arrived.

He resents his seemingly perfect older sister (he calls her “the Unicorn”), who gets straight A’s, is super-talented and beautiful, has an inhumanly cool boyfriend named Pierre (“the Male Unicorn”), and basically ignores Jake, so there’s that too.

But you know what? Jake is afraid of being the lonely weirdo, thinks he’s not good enough, feels incredibly bad about cheating, AND he sat on an open tube of red oil paint the first day of school, so there’s that.

It was a REALLY good start.

You might know comedian Craig Robinson from The Office (an adult show) or Hot Tub Time Machine (an adult movie) and writer Adam Mansbach from Go the [Expletive] to Sleep (an adult book), and illustrator Keith Knight from The K Chronicles (an adult comic strip). And you might THINK these guys would be the first people to write something funny, but the last people to write a book a tween should actually read, much less one that ends up being a welcome relief from what often passes as tween humor.

(I’d forgive you if you think that, because I might have thought that a little too.)

But I was wrong, so wrong.

While I am forced to endure my son’s tween sense of humor, which involves turning every insult he reads onto his family members, and my husband’s adult sense of humor which involves putting a rubber band around the kitchen sink sprayer and waiting for me to cut on the water (try living with TWO Calvins), my sense of humor is much drier and more cerebral, i.e. not funny according to my husband and son.

So when Jake realizes that to fit in at art school he has to “outweird” the other kids and comes up with some ideas, I about died laughing.

From now on, insist that everybody at school, including teachers, refer to you as The Dentist.
Refuse to explain why.
This might be even better:

Start a school club.
The most ridiculous club you can think of.
Possible club ideas:
a) Parakeets for Peace:
When people show up to join, tell them sorry, the club is only for parakeets and turn them away.

Not only did I think that was hilarious, so did my son. (I’m still working with him on my joke). As a matter of fact, my son thought the entirety of Jake the Fake Keeps it Real was bizarrely hysterical, which, as it turns out, is a great distraction from being disrespectfully funny. And I would much rather my son imitate Jake by chewing the same piece of gum for six hours and then writing a play about it than turn the sprayer on me.

But the kicker, and here’s where Robinson, Mansbach, and Knight really win my son’s heart for life: The end of the book, chapter 13, where Jake, with his no-talented, I faked-my-way-into-this-school-and-really-can’t-play-the-piano self, has to perform in the school talent show (it’s a final project and big grade, and evidently if you blow it, you have to quit school and work on a fishing boat). Jake has nothing, NOTHING. He sits down at the piano, knows he can’t do it, knows he’s a disappointment, so he looks into the blinding lights and stands up from the piano.

I may try to be a responsible parent, but who am I to take away a joke or two about puking?

Then he opens his mouth.

I don’t want to give it all away, but the end of chapter 13 says it all:

So I, the responsible, empathetic, supportive, and patient parent I attempt to be, succeeded in one thing: Finding a fittingly funny role model for my tween who desperately wants to be fittingly funny. (I know he does, he just doesn’t know how yet. Ah, tweendom.) And this is a series which buys me some time. While Jake the Fake has a smattering of puke, and toilet jokes, troubles, and sarcasm, they are key elements to “keeping it real” without being the focus. I’d say Jake the Fake is the porridge to my Goldilocks: Not too hot, not too cold, but just right. After all, I may try to be a responsible parent, but who am I to take away a joke or two about puking?

Because maybe one day, when tweendom is over, my son might say, as Jake says after his mother praises his talent show appearance and hugs him tightly, “She’s pretty cool sometimes, my mom.”
https://247sports.com/high-school/georgia/board/football-106025/contents/matchthread-real-madrid-vs-liverpool-live-stream-free-060421-163763192/

Replete with dismal orphans, rats, and twirly mustaches, ‘The Unadoptables’ is an heir to the