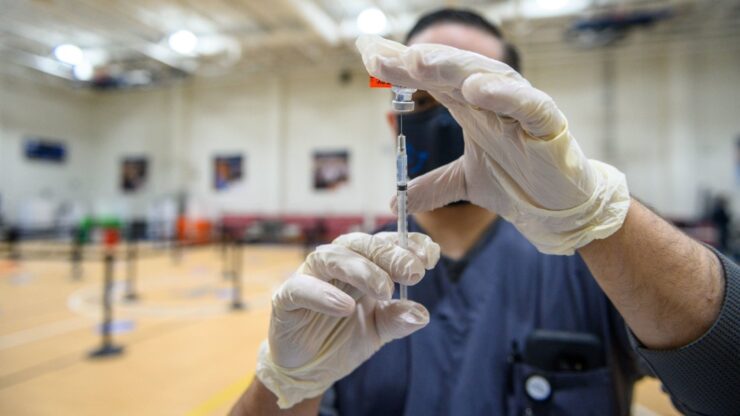 Moderna And Pfizer On Track To Hit Vaccine Production Goals

President Biden’s promise that there will be enough vaccines for every U.S. adult by the end of May has some Americans wondering if it’s too good to be true.

But before the pharmaceutical companies can hit their May goal, they’ll need to reach an earlier target: Pfizer and Moderna agreed to supply 100 million doses a piece to the U.S. by the end of March. With just under three weeks left, both companies have their work cut out for them.

Nearly 64 million Moderna doses and 61 million Pfizer doses had been distributed as of Wednesday afternoon. The first doses went out shortly after the Food and Drug Administration authorized the vaccines for emergency use in December.

So although around 80 percent of the time before the looming deadline has lapsed, the companies have only distributed 63 percent of the doses they’re obligated to.

“On Moderna and Pfizer, as you know, we’ve done a lot to help both companies with their manufacturing processes,” President Biden’s COVID-19 czar Jeffrey Zients said during a Feb. 24 press briefing. “We’re in touch with them all the time — daily, hourly — to make sure that we’re doing anything we can to help them and to monitor their production.”

Help has included using the Defense Production Act, a wartime power both Biden and former President Donald Trump have used to speed vaccine manufacturing. The Biden administration also helped Pfizer obtain equipment that it couldn’t get during the Trump administration.

Will the companies make the March goal? It looks likely.

Distributions skyrocketed the last two weeks, according to an NPR analysis of archived data from the CDC’s vaccination tracker. Since early January, they wobbled between 8 million and 10 million total doses a week. But in both the last week of February and again the first week of March, the companies delivered around 20 million doses. If Pfizer and Moderna can keep it up, they’ll both hit 100 million.

Both companies have expressed confidence. In a statement to NPR, Pfizer spokesman Steven Danehy also reiterated a promise CEO Albert Bourla made in late January to deliver even more doses by the end of the month.

“Since the end of last year, we have made several enhancements to our COVID-19 vaccine manufacturing facilities and processes – which has doubled our output.

Moderna spokesman Ray Jordan said, “We haven’t been reporting weekly distribution numbers, but we do continue to expect to distribute 100 million doses by the end of the first quarter (eg, March 31).”

Erin Fox, the senior director of drug information and support services at the University of Utah Health Hospitals, says she’s hopeful that the drugmakers can deliver 100 million doses by the end of March. And that even if they don’t, she hopes they hit the goal a few weeks later.

“So much of drug manufacturing and vaccine manufacturing is pretty opaque. We don’t … have a lot of visibility there,” says Fox, who also tracks drug shortages and supply issues nationally as part of the American Society of Hospital Pharmacists. “But we do know that Pfizer is certainly ramping up to the point where they’re taking other medicines offline. And we’re actually expected to have shortages of other products because they’re ramping up that production.”

“We don’t have a good idea of how much we’re going to get really until it’s in our hands,” she said. “We can’t count on it. And that means we can’t organize our clinic with the people that we need to be there to give all the vaccines.”

The Department of Health and Human Services did not respond to multiple requests for comment on this story.

Still, if by chance the companies don’t deliver all those doses by March 31, it’s important to remember that the target deliveries were based on projections, said Norman Baylor, a former director of the Food and Drug Administration’s Office of Vaccines Research and Review.

There one’s other wrinkle worth noting. Pfizer and Moderna only need to “release” the doses to the government to fulfill their contractual obligations, meaning the doses don’t have to leave the factories to be counted toward the commitment. The companies just have to say they’re ready to go for distribution. So the companies can hit their contractual targets before the doses are delivered to vaccination sites.
https://247sports.com/high-school/california/board/hs-football-105685/contents/watch-jamel-herring-vs-carl-frampton-live-stream-boxing-030421-163601561/

Moderna And Pfizer On Track To Hit Vaccine Production Goals