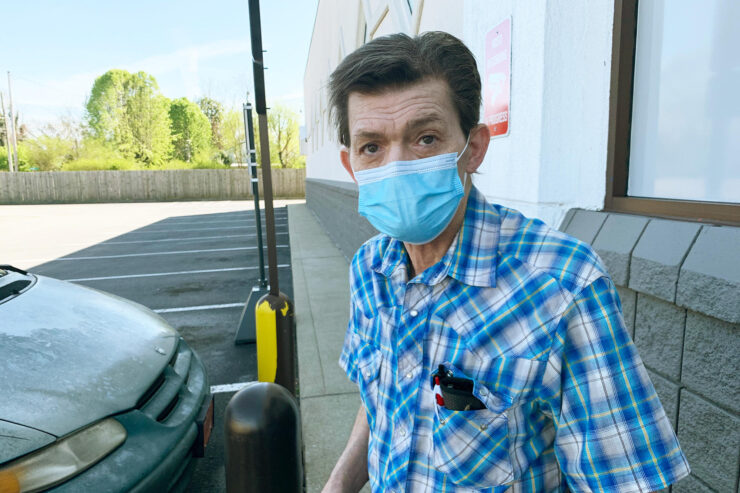 ‘It’s Not A Never Thing’ — White, Rural Southerners Hesitant To Get COVID Vaccine

There are more than enough shots to go around in communities such as Hartsville, Tenn., the seat of Trousdale County, a quiet town tucked in the wooded hills northeast of Nashville.

It’s a county that is nearly 90% white and where Donald Trump won nearly 75% of the votes in 2023. There was no special planning to reach underserved communities here, other than the inmates at the state prison, which experienced one of the nation’s largest correctional facility outbreaks of COVID-19.

But now Tennessee, like much of the nation, is finding that rural, white residents need a little more coaxing to roll up their sleeves for the shot. This week, the state published results from a statewide survey, and a focus group of unvaccinated residents. More than 45% of white, rural conservatives said they were unwilling even to consider taking the vaccine.

“There’s nothing inherently unique about living in a rural area that makes people balk at getting vaccinated. It’s just that rural areas have a larger share of people in the most vaccine-resistant groups: Republicans and white evangelical Christians,” says Drew Altman, president and CEO of the Kaiser Family Foundation.

The foundation’s latest survey data find that more rural residents have been fully vaccinated than urban dwellers. But this is likely because there haven’t been the same long waits in rural areas to get the vaccine. And now the initial demand has tapered to a drip. Currently, the number of rural residents (21%) saying they’ll never get the vaccine is twice the number (10%) in urban areas.

On a recent weekend in Hartsville, the local health department had trouble filling up even half the spots for a COVID-19 vaccination event at the high school. Down the street at the Piggly Wiggly grocery store, Cris Weske, 43, stopped in to buy a can of dipping tobacco. He says he isn’t even tempted to get the COVID-19 vaccine, no matter how widely available it is.

Weske, who is wearing a “We the People” T-shirt, says the U.S. Constitution protects his choice to opt out of the massive nationwide vaccination effort.

Residents line up for COVID-19 vaccinations inside a Walgreens in Hartsville. The local pharmacy across the street also offers vaccinations, along with the public health department around the corner.
Blake Farmer/WPLN
Public health officials in Tennessee expected to face some reluctance when the COVID-19 vaccine finally arrived. But they were surprised to realize that the most stubborn group might be white, largely conservative residents in rural Tennessee.

National polling by NPR, PBS NewsHour and Marist finds that rural, white Republicans — particularly supporters of Trump’s — are among the least likely to get a vaccine. The issue is evident in state-by-state vaccination rates, with Alabama, Georgia, Mississippi and Tennessee trailing the rest of the country. The White House has begun launching new initiatives targeting so-called red states, such as setting up partnerships with NASCAR, professional sports and even country music.

“We voted for Trump, but Trump’s got nothing to do with us not taking the vaccine,” says Hartsville’s Cindi Kelton, 67, as she loads dog food and milk into her minivan outside the Piggly Wiggly. “We were planning on taking it — until our doctor passed away.”

More scared of the vaccine than the virus

Her physician, Raymond Fuller of Gallatin, Tenn., died of COVID-19 in late January. It’s unclear whether he had been vaccinated. Either way, Kelton worried the vaccine could have played a role despite how safe it has been shown to be in rigorous clinical trials.

Kelton has chronic obstructive pulmonary disease and emphysema — lung diseases that put her at high risk of complications with COVID-19 — but maintains she’s still more scared of the vaccine than the virus.

In many rural communities, scant attention has been paid to batting down rumors or answering vaccine questions. Public health officials in Tennessee and other Southern states have been far more focused on building trust with Black and immigrant groups concentrated in urban areas. And even their outreach in rural communities has targeted those traditionally underserved groups.

Cindi Kelton, 67, of Hartsville says she was planning to take the vaccine until her physician died of COVID-19 in January.
Blake Farmer/WPLN
But some leaders of rural communities are the ones actively sowing doubts. They include state legislators pushing anti-vaccine legislation and even a few pastors piping up on Sunday mornings. Greg Locke is an outspoken white preacher in Mount Juliet, Tenn., who peppers his sermons with mocking questions.

Southern states, where vaccination rates are the lowest in the country, have frequently turned to ministers, seeing them as key allies who are trusted at the local level. But it’s mostly Black churches, from Mississippi to Georgia, that have agreed to hold informational town halls or organize and host vaccine events.

In recent days, some key white evangelical leaders have stepped forward to advocate more loudly for vaccinations. Among them is J.D. Greear, president of the Southern Baptist Convention. But Greear pastors a church in Durham, N.C. — hardly a conservative stronghold. And the responses to Greear on social media were impassioned and even irate — exposing how divided many conservative churchgoers are.

The white Baptist pastors in Hartsville, when contacted for this story, declined to weigh in, saying they were leaving the decision entirely up to members of their congregations.

Pastor Omaràn Lee, a hospital chaplain in Nashville, has been working with Black churches in Tennessee to promote vaccination. He says the concerns in Black congregations in his city aren’t that different from what he hears from rural, white communities.

But Lee notes that, six months ago, Black communities were saying the same thing when Trump was in office. “Anytime you have a marginalized person, you have people who [feel] left out, they’re going to be skeptical.”

Skepticism about the vaccine, Lee says, can be overcome if there’s an intentional effort to reach people where they are.

But in small towns such as Hartsville, there hasn’t been much attention on the issue. People are less likely to hear the message from church leaders, and other communication can be more limited. There’s not much in the way of local media providing information about how to sign up and where to go.

“I don’t even have a computer. I’m old school,” says Brenda Kelley, a 74-year-old widow who says she didn’t even know she was eligible to get the vaccine yet, much less that tons of shots are available. The vaccination event at a nearby high school was advertised mostly on Facebook.

“Kinda scared to get it in a way, and in a way I want it,” Kelley added. “And my children, neither of them want it. So I don’t know.”

Plus, Kelley has her own questions she’d like answered first — such as whether her diabetes, while elevating her risk of developing serious COVID-19, might also cause problems with the vaccine. Health officials say the vaccine is safe for people like her, but she wants to hear it from her doctor.