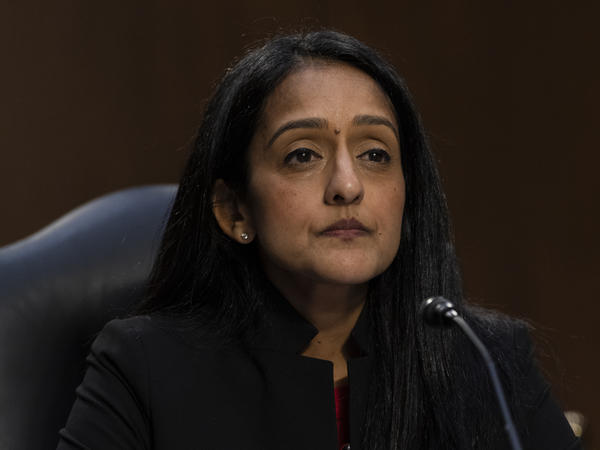 The Senate on Wednesday narrowly voted to confirm Vanita Gupta as associate attorney general, elevating a longtime civil rights attorney to the third-highest position inside the Justice Department on the same day the agency announced renewed efforts to monitor local police practices.

Gupta was confirmed by a vote of 51 to 49, with only one Republican, Sen. Lisa Murkowski of Alaska, breaking ranks to join Democrats in approving her nomination.

With her confirmation, Gupta, 46, will become the first woman of color in Justice Department history to serve as associate attorney general — a role in which she will oversee the department’s civil rights litigation as well as its antitrust, civil and environment divisions.

Wednesday’s vote marked the culmination of a contentious confirmation process for Gupta, who nearly saw her nomination derailed by Republicans over her advocacy for progressive policies as well as her past criticism of former President Donald Trump during her time as head of the Leadership Conference on Civil and Human Rights.

During her confirmation hearing, Gupta apologized for any “harsh rhetoric” she has used against Republicans but nonetheless struggled to win GOP support. In remarks ahead of the vote, Minority Leader Mitch McConnell, R-Ky., announced he would oppose Gupta, saying she had “levied attacks on members of this body” and “amplified left-wing fear-mongering toward judicial nominees and sitting federal judges.”

At the time of her hearing, Gupta had also been targeted by five Republican state attorneys general as well as a nearly $1 million negative advertising campaign launched by the conservative Judicial Crisis Network. Much of the criticism centered on Gupta’s work at the Justice Department during the Obama administration, when she oversaw investigations of police departments after white officers shot and killed Black citizens — including Michael Brown in Ferguson, Mo.

Explaining her party-breaking support for Gupta, Alaska’s Murkowski said that while some of the nominee’s past remarks troubled her, she was ultimately swayed by a lengthy conversation with Gupta.

“I am going to give the benefit of the doubt to a woman who I believe has demonstrated throughout her professional career to be deeply, deeply committed to matters of justice,” Murkowski said.

Gupta won similar praise during her confirmation from the Fraternal Order of Police, the nation’s largest law enforcement union. In a letter to the Senate Judiciary Committee, the group’s president called Gupta a “strong defender of civil rights” and said she “always worked with us to find common ground even when that seemed impossible.”

Gupta will return to the Justice Department at a moment when it is recommitting itself to increased federal oversight of police departments.

The announcement marked the Biden administration’s first such “pattern or practice” investigation — a tool used more than two dozen times by the Obama administration but just once under Trump.

Gupta is expected to play a leading role in the department’s work to police the police. Addressing the verdict against Chauvin on Tuesday, President Biden said Gupta had spent her entire career “fighting to advance racial equity and justice,” saying she had “the experience and the skill necessary to advance our administration’s priorities to root out unconstitutional policing and reform our criminal justice system.”