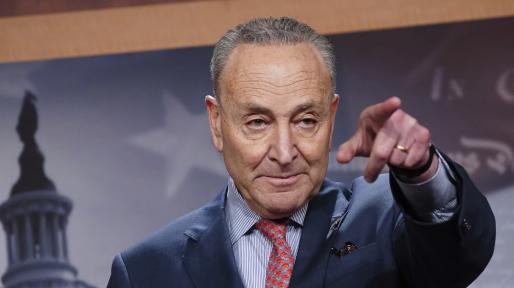 going to move forward, period’: Schumer ready to move on changes to marijuana laws – even if Biden isn’t

going to move forward, period’: Schumer ready to move on changes to marijuana laws – even if Biden isn’t

Senate Majority Leader Charles Schumer, a strong advocate of marijuana legalization, is ready to move ahead with major changes to federal laws prohibiting the use, sale and production of cannabis products – with or without the support of President Joe Biden.

During the 2020 presidential campaign, Biden – a leading Democratic proponent of tough drug laws during his long Senate career – was the only leading Democratic primary candidate to oppose federal legalization of the plant, saying more study is needed. While the president supports legalizing the drug for medical use and the decriminalization of possession, White House press secretary Jen Psaki told reporters last week that Biden’s “position has not changed” regarding full legalization since the campaign.

Schumer told Politico he respects Biden’s desire for more study on the subject, but said “we will move forward” even if the president’s view stays the same.

He said he’s studying the issue,” the New York Democrat said when asked if he would introduce a legalization bill even if Biden opposes it, adding he wants to give the president “a little time” to research the issue.

“I want to make my arguments to him, as many other advocates will,” Schumer told Politico. “But at some point we’re going to move forward, period.”

Schumer introduced a legalization bill in 2018 and is currently working on legislation to change federal marijuana laws with Sens. Cory Booker, D-N.J., and Ron Wyden, D-Ore. Schumer has not yet revealed the contents of the new bill and it is unclear if the legislation will include full federal legalization or a more modest move toward decriminalization that Biden might be more likely to support.

But when asked by Politico about whether the new legislation calls for legalization or decriminalization, Schumer said, “I am personally for legalization. And the bill that we’ll be introducing is headed in that direction.”

“I don’t want to get into the details of our bill. You’ll have to wait and see,” Schumer said to Politico, though he indicated it would include a provision to expunge federal marijuana convictions from people’s criminal records. Schumer also said he would support pushing states to similarly expunge criminal records through federal “incentives and disincentives.”

Schumer, whose home state of New York legalized marijuana last week, told Politico his own position on the matter “evolved” after seeing the success of the first states to approve recreational use of the drug.

“By pledging to advance marijuana reform, Majority Leader Schumer is representing not only the will of the 70% of Americans who now support full legalization, but also the over 40% of them who currently reside in states where that is already the reality,” Erik Altieri, the executive director of the National Organization for the Reform of Marijuana Laws, told USA TODAY in a statement.

“President Biden needs to join Schumer and the American people on the right side of history and, if he will not join them in calling for a correction to this long-running injustice, Congress should force his hand by putting legislation to end our failed prohibition on his desk as soon as possible,” Altieri said.

Vice President Kamala Harris supported marijuana legalization as a member of the Senate. When asked if he had spoken to Harris about the planned legislation, Schumer said, “We would like to get her involved, but we have not yet.”

The oldest son of the late King Hussein and his favourite wife Queen Noor, Prince Hamzah is a graduate of the UK’s Harrow