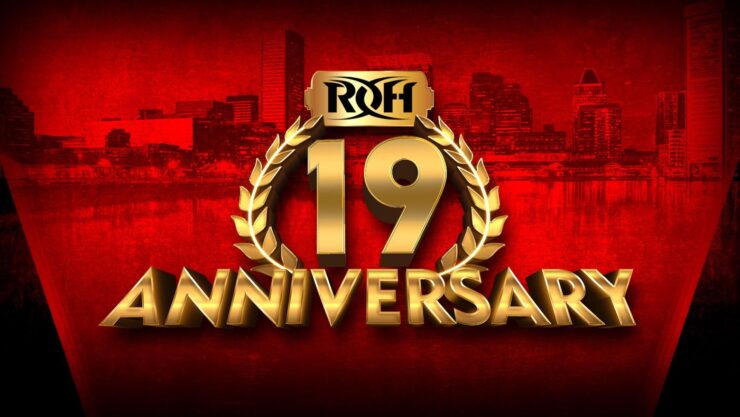 The 19th Anniversary of Ring of Honor is upon us and the promotion is celebrating on March 26th live on pay-per-view. The event will be broadcasted live on Honor Club, FITE, and pay-per-view. A free pre-show will start at 8 p.m EST before the main card, which begins at 9 p.m. EST. The pre-show will air on Honor Club, FITE, YouTube, and Facebook. ROH is pulling out all of the stops for this one as all titles are on the line as well as some highly anticipated grudge matches. Here’s a look at the full 10-match card.

Number one contender Dak Draper challenges current champion Jonathan Gresham for the Pure Championship. Draper is coming off a victory against Fred Yehi and a dark match victory against Joe Keys to cement his shot against Gresham. Draper is looking to dethrone the current champ and member of The Foundation, Jonathan Gresham. Gresham won the Pure Tournament to capture the title in November of last year. He has successfully defended the title against Flip Gordon and Joe Keys and has looked every bit the part of a great Pure champ. Will he be able to make it three defenses in a row?

Current tag team champion Dragon Lee was removed from the card at the last second to address an eardrum injury. His father and La Facción Ingobernable stablemate will take his place in the match alongside Kenny King to take on The Foundation’s Rhett Titus and Tracy Williams. The two factions have been feuding on ROH TV for some time as they sit on opposite ends of the ROH philosophy. The Foundation believes in restoring the honor that ROH was founded on while LFI aims to turn ROH upside down by any means necessary. The two factions squared off in an eight-man tag match on ROH TV #496 that ended with LFI standing tall. Will that momentum carry into the 19th Anniversary PPV?

Dragon Lee was scheduled to pull double duty at 19th Anniversary, defending both the Television and Tag Team Titles. Due to his injury, Lee’s LFI stablemate Kenny King will pull double duty and defend the ROH World Television Title on his behalf. Number one contender Tracy Williams is coming off of victories against The World Famous CB and a dark triple threat victory over Bandido and LSG. Williams is looking to take some of the ROH gold off of LFI and bring it back to The Foundation. Williams will also compete in two matches on the card, and is looking to bring home two new belts to The Foundation.

RUSH has held the ROH World Championship since February 2020 when he defeated PCO and Mark Haskins in a triple threat match. He has successfully defended the title against Brody King and Shane Taylor. The leader of LFI will square off with ‘The Franchise’ Jay Lethal who will represent The Foundation. Lethal earned his number one containership with a fatal four-way victory over EC3, Matt Taven, and Jay Briscoe. The two squared off as part of the LFI vs Foundation eight-man tag match on ROH TV in which LFI won. Lethal is looking to shake off the loss and capture his third ROH World Championship, which would tie him with Adam Cole for most all-time.

To see where you can watch ROH on TV or see the latest episode of ROH TV, click here. For all things ROH, check out Honor Club.

Looking to talk wrestling, pro football, or any number of sports? Head on over to the LWOS Boards to engage in conversation with fellow fans!

Find out what makes a good maintenance contractor

A fair rebuilding association awards capable recovery organizations to private and commercial properties. Organizations can consolidate the repair or restoration of property damage related to fire, smoke or water...