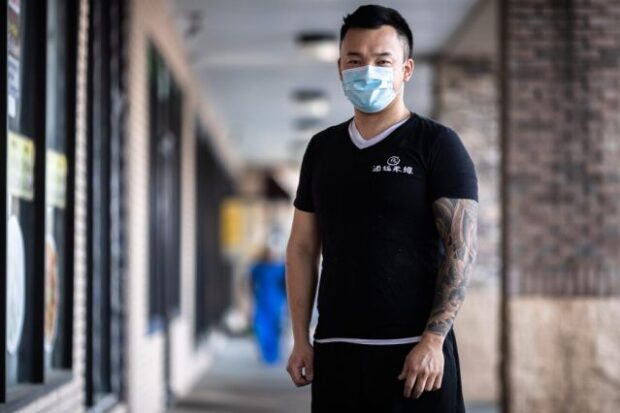 ‘Don’t let fear get to you’: In Doraville, one of Georgia’s most diverse places, spa shootings won’t depress hope for the future

DORAVILLE, Ga. — The signs change from English to Mandarin, Vietnamese, Korean, and more as Buford Highway cuts through one of the most diverse places in all of Georgia.

In a state where less than 5% of residents are of solely Asian origin, according to U.S. Census data, Doraville’s number is about 16% – and many of them have settled along this highway off Interstate 85, which has transformed from a settlement for immigrants to a bustling community of Asian and Hispanic small businesses.

The Tuesday night shooting spree at three Atlanta-area spas that killed eight people, including six women of Asian descent, horrified a nation already reeling from a surge in hate incidents against Asian Americans. It sent a cold shiver through the restaurants, grocery stores and other businesses in Pinetree Plaza and Asian Square on Buford Highway.

Sue Huey of New Image Salon got a text from her daughter in San Francisco, pleading with her to not open her shop the next day.

Shuai Yang, co-owner of LanZhou Ramen, already worried for his family’s safety amid a rise in anti-Asian rhetoric across social media and increased incidents of violence from California to New York, grew more fearful for his wife and daughters.

H Massage closed for the night.

Many of the stores along Buford Highway have been here for decades, the owners having built a community for themselves and their children. And Wednesday morning, still stunned by the horrific violence that occurred about 10 miles away on Piedmont Road in Atlanta, they went back to work.

Huey opened her front door for business. So did H Massage.

“Don’t let fear get to you,” said Jane Christian, who works at H Massage, “because you’ll be stuck in a rut for a very long time.”

Doraville police, city council stand in solidarity with Asian community
When news of the shooting rippled through Doraville on Tuesday night, Wendy Yang felt immediate fear – especially since she works at Yini Massage, a spa similar to the three that were attacked in the gunman’s rampage.

She said her coworkers suggested she bring a gun to work for safety. But her fears were soon alleviated when Doraville police officers arrived with the news that the suspect, Robert Aaron Long, had been apprehended by law enforcement.

Long, 21, of Woodstock, Georgia, has been charged with eight counts of murder. The recently furloughed laborer told police he bought a 9mm handgun the day of the shooting and used it on a rampage aimed at massage parlors he frequented as a customer. He told investigators he targeted the spas because he has a sex addiction and wanted to “eliminate” the businesses that fed his sexual compulsion.

Huey continued to do what she had already been practicing – locking the doors of her salon and not going out alone in the night.

LanZhou Ramen’s Yang feared for his wife and two school-aged daughters. “As (for) me, I’m not really that worried that much, but I’m really concerned about their safety, that’s the most important,” he said.

The Doraville Police Department helped ease tensions, sending officers to the shops and restaurants along Buford Highway to check on the well-being of the city’s Asian community.

The police weren’t alone in their solidarity: The Doraville City Council passed a resolution the day after the shooting that condemned the violence across Atlanta.

The resolution read, in part, “that we all have more work to do to put an end to the violence and hate.”

What can be done to stop anti-Asian violence? ‘It’s time for us to speak up’
Here on Buford Highway, the reactions to Tuesday night’s violence were as diverse as the community itself. While some are now more fearful than others, they all share the same hope for a better future.

With time, Huey hopes violence and hate will subside. “I think it will pass,” she said.

Wendy Yang, of Yini Massage, is determined to not let this one “crazy” person change her interactions with customers or to cause her worry about something out of her control.

“I will be nice, but I do know some people [are] crazy. I cannot control it,” she said.

And Shuai Yang, the co-owner of the ramen restaurant, had a simple request: Don’t be a bystander to racism and violence.

March Madness updates: The scores and moments you need to know from Friday at NCAA Tournament