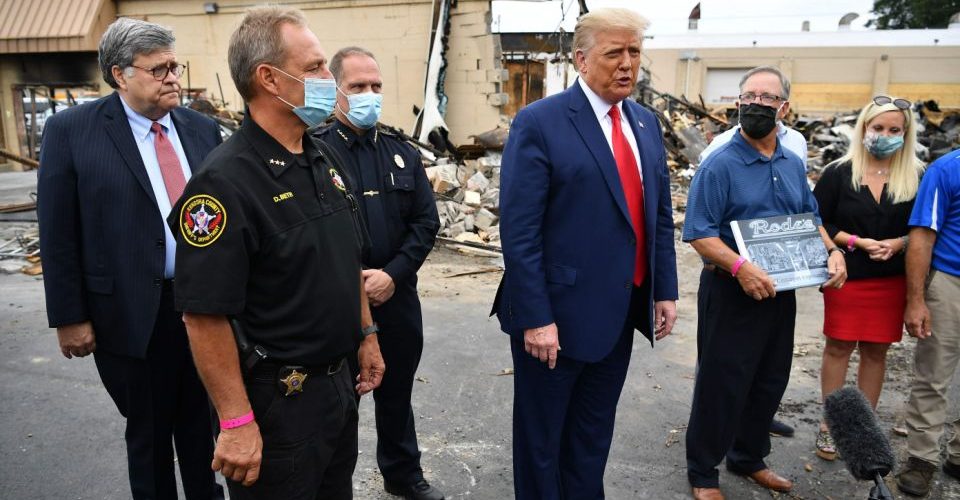 As racial tensions spilled into America’s streets, the Trump administration repeatedly sought to eliminate a long-standing Justice Department unit that for decades has mediated racial, ethnic and gender clashes that are once again surging across the country.

While congressional intervention kept the unit afloat, the persistent budgetary attacks and the Trump administration’s pursuit of harsh immigration policies along with a rollback of some civil rights protections prompted some wary communities to refuse its help.

The turmoil, a senior Justice official acknowledged, dealt a severe blow to public confidence in a long-trusted asset known nationally as the “peacemaker program” at time of deep division in the United States. The official, who was not authorized to comment publicly, said some doors were closed to the service because of a lack of trust during the prior administration.

“That feeling trickled down to all aspects of the DOJ,” Yang said, though AAJC was among those that Congress to keep the Community Relations Service alive as the administration threatened to zero out its budget, which has ranged between $15 million and $16 million.

We saw CRS as extremely valuable to communities of color,” Yang said.

From Rodney King to AAPI incidents
A history of Community Relations Service work reads like a timeline of America’s continuing reckoning with race and discrimination:

From the 1992 Los Angeles riots sparked by the acquittal of four white police officers in the beating of Rodney King; the fatal shootings of Black victims Trayvon Martin in Sanford, Florida in 2012 and Michael Brown in Ferguson, Missouri in 2014; to the 2015 massacre of nine Black people at church in Charleston, South Carolina — Justice mediators have traveled the country attempting to bring calm to communities riven by conflict and loss.

Following the 9/11 attacks, CRS staffers intervened in Muslim and Arab-American communities in an attempt to contain a backlash that ranged from harassment to violence. When Black churches burned across the South during the mid-1990s, mediators were dispatched in part to connect law enforcement with anxious Black communities.

More recently, CRS staffers deployed to Charlottesville, Virginia, in 2017 to monitor tensions during the Unite the Right Rally that turned violent when white supremacists and other groups opposing the removal of Confederate statues clashed with counter-protesters. Justice staffers remained in the area after the conflict in an attempt to assist community leaders to “repair race relations,” according to a Justice summary of the unit’s work.

Earlier this year, as a backlash against the coronavirus prompted attacks on Asian Americans, CRS officials hosted virtual meetings with community groups in the San Francisco Bay Area, and served as intermediaries between local law enforcement and Asian business owners who established their own patrols to protect stores and restaurants from vandalism and looting.

Staffing languished under Trump
For the Trump administration, however, defunding the Justice unit had become a sustained campaign. Each time the administration proposed shutting down the program officials variously cited needs to improve “efficiency” and “save money.”

The effort ultimately contributed to a decline in staffing, from 74 funded positions at the height of the Obama administration to 34 at the end of the Trump presidency, even as the service’s mission took on new urgency when violence and harassment directed against Asian Americans began to swell amid the coronavirus pandemic.

Stop AAPI Hate, which includes a self-reporting tool for harassment, discrimination and violent attacks, recorded 3,795 incidents of anti-Asian discrimination across the U.S. from its inception on March 19, 2020 to Feb. 28, 2021, according to data released just before this month’s mass shooting in Atlanta, Georgia.

Calls for Community Relations Service to focus on ‘beyond terrifying’ attacks on Asian Americans
Still, lawmakers have urged the Justice Department to focus renewed attention on hate-related incidents targeting Asians amid a wave of racist attacks and harassment growing out of the coronavirus pandemic.

Last week, Rep. Judy Chu, D-Calif., the chairwoman of the Congressional Asian Pacific American Caucus, described the Atlanta murders as “beyond terrifying, but it just brings home to so many Asian Americans that they are fearful of their lives and circumstances.”

The Justice Department declined comment on whether CRS has been working issues related to the shooting.

Yang said a key component of the Justice Department response should involve a well-funded and re-stocked Community Relations Service to expand its reach to troubled communities.

“One of our requests (of the Biden administration) is to ensure that the CRS has adequate resources,” Yang said. “CRS is one piece of the solution, but it is an important piece.”

Perhaps not since the Nixon administration when staffing dropped from about 323 to 100, has there been such a dramatic decline in CRS staffing, said Grande Lum, the unit’s former director during the Obama administration and co-author of a book on the unit’s long history of conflict resolution.

Lum, now a professor and provost at Menlo College in California, said the Obama Justice Department added $3 million to the unit’s budget during the course of the administration, often lauding its work in the process.

It’s absolutely demoralizing,” Lum said of the most decline. “One of the biggest problems is that people with a lot of experience have left the agency. I know a lot people (who remain) are overwhelmed. It’s now a matter of getting people in who will be trusted by the communities” at time when the need is growing.

The fatal shootings in Atlanta, Lum said, pushed Asian discrimination into the “national consciousness” even though hate-related crime and harassment has been building for months.

To address the current need, Lum said CRS should be tripled in size.

There is just not enough people to go around, Lum said.